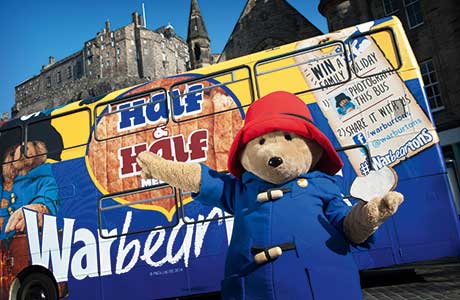 SCOTLAND’S capital and its Commonwealth Games city played host to a loaf with a difference late last month.

Paddington Bear and a team from the newly named Warbeartons bread giant rolled across the border in the Warbeartons Adventure Bus, the world’s first travelling loaf.
The new Paddington film will be released in the UK this year and Warburtons changed its name for the first time in its 138-year history, on its headquarters and on Half & Half loaves, as part of a major collaboration.
Touring in a double-deck bus made up like a loaf, Paddington is sharing summer adventure tips with families for the school holidays. Families get the chance to meet Paddington Bear, sample Paddington’s favourite marmalade sandwiches and take home a special summer adventure guide – featuring Warbeartons Top 10 Family Adventures and Top 10 Adventurous Sandwich Recipes.
In Scottish summer holiday season Paddington surprised members of the public in Grassmarket and on the Royal Mile in Edinburgh before setting off to Glasgow to say hello to Clyde and the thousands of sports fans crowding into the city for the Commonwealth Games.
The Warbeartons Adventure Bus then headed south to continue its tour but was
due back in Edinburgh and the Scottish Borders areas in the first few days of this month.