TOBACCO firms and trade bodies have criticised claims by the Scottish Government that the introduction of standardised tobacco packaging has resulted in plunging smoking rates in Australia. 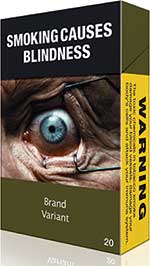