AT least one brand is called Innocent and, until recently, there were few bad things said about fruit juice.

But things have changed and some health lobbyists have brought fruit juice into national debates about sugar and sugar-containing food and drinks. 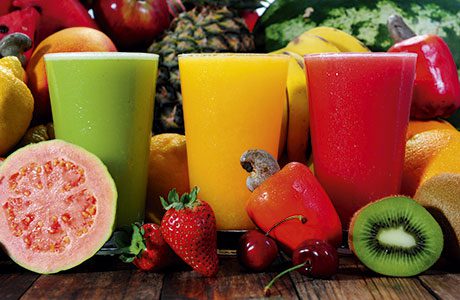 Until now a serving of pure fruit juice was seen as one of a consumer’s recommended five-a-day portions of fruit and vegetables. And juice was recognised by many as a good way of getting members of the notoriously fruit and veg averse British public to consume at least some of the vitamins, antioxidants and other goodies that fruit provides. Now, however, detractors say whole fruit (fibre and all) should be prioritised.
But fruit juice and juice drinks providers have neither been slow to enter the debate nor to develop products (including items where some fruit sugar has been substituted by calorie-free, natural stevia) that are designed to address the issues.
If fruit juice and juice drinks might be facing a squeeze in the world of food politics, the products have actually been doing pretty well commercially. However, there has been significant variation in performance between different drinks and between different types of store.
Earlier this year the annual Britvic Soft Drinks Review – based on Nielsen figures for the off-trade for the year 2013 – showed that both juice and juice drinks were doing well. But pure fruit juice sales fared best in large supermarkets while juice drinks (products which feature large amounts of juice along with other ingredients such as water and sugar) did exceptionally well in convenience outlets.
Overall, the review said, pure juice had held on to its position as the second largest sub-category. However rising costs of raw materials had forced price increases that had curtailed volume growth. Tropicana retained its position as number one brand. Own-label fruit juices held the largest value share, some 51%. But the dominance of own-label declined in 2013. The private-label brands dropped by 8% in value and 10% in volume at a time when premium-priced products such as Copella and Innocent increased both value and volume sales.
The convenience channel didn’t see growth in pure fruit juice sales in 2013. In 2013 there was a dip in value and volume sales. The review suggested c-store shoppers often see juice as more expensive than other forms of refreshment.
It was a different story with juice drinks, though. They provided, said the review, “one of the category’s success stories, experiencing overall value growth of 12%”.
Both value and volume sales of juice drinks grew in supermarkets. However, it was in the convenience channel that some of the greatest value sales increases were recorded. Juice drinks value sales were up by as much as 15% in c-stores, making it one of the fastest-growing soft drinks sub-categories in those outlets.
Driven by consumer enthusiasm for value-for-money food and drinks with broad appeal, juice drinks proved popular among shoppers buying products for breakfast and school and works lunches, the Britvic review suggested.
And the children’s juice drink Robinson’s Fruit Shoot was said to have had a strong year in 2013, rising to levels of market share and household penetration that it had last achieved before the brand had been hit by product recall problems.