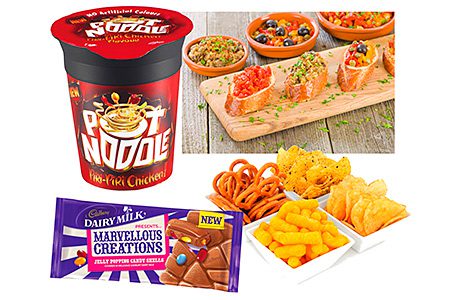 What is a snack, anyway? The definition can be elusive but what isn’t in doubt is that global sales of quick and easy eats, for at-home or on-the-go consumption, are soaring.

THE Spanish have tapas and pinchos (or, in the Basque region, pintxos). French children have goûter when they come home from school while the Swedes stop every morning for fika, which looks very much like our elevenses.
In its Snacking White Paper Mondelez International describes snacking as: “A consumer behaviour. A small eating moment enjoyed between meals or to replace meals.” And it says: “In the market today, we tend to view snacking as a narrow range of products rather than the behaviour it is.”
In its study of snacking patterns across five European countries, including the UK, Mondelez quotes Euromonitor figures that put the market at $335bn in western Europe and $1.3tr worldwide.
An American study cited by Mondelez shows that people in all age groups graze more often than they did 30 years ago.
The most recent research reveals that we now snack on average three times a day. There are no limits to the foods that people will nibble between meals: eggs, vegetables, breakfast cereals and yogurt, chocolates, biscuits, fruit and cheese – washed down with milk, juice, tea, coffee and hot chocolate.


Snacking is deeply ingrained among UK adults, with 98% of adults snacking at home, work, or a place of study and 70% of adults snacking when on the go.
Workers are the most dedicated grazers while 25-34 year-olds are the keenest to eat on the go.
Such changes in eating patterns have been driven by changes in lifestyle. People snack every day, in and outside the home. Mondelez identifies six “snacking peaks” through the day, and says 30% of people nibble before noon.
Hunger is the main reason for half of all consumers reaching for something to munch. That’s especially so among the young (63% of 18-24 year-olds are ‘hungry’ snackers) but decreases with age. Apparently only 35% of over-65 year-olds are actually hungry when they reach for a snack.
The report finds people have three main motivations when they yearn for a snack. The first is “fuel”, when the consumer feels a physical need for a snack to feed or recharge the body. The preference,then, is usually for nutritious, filling items.
“Treat” is when someone has an emotional need for a snack to improve their mood. That often sees consumption of a sweet or savoury treat between meals.
“Boost” is a mental pick-me-up. A boost snack is often used in the morning and usually includes caffeine. Mondelez found those aged 18-24 were the most likely consumers to feel the need for such a kick-start. Europe’s favourite snack is fruit, followed by chocolate, with sweet munchies accounting for three out of every five snack sales. A quarter of all out-of-home snacks include coffee.
Mondelez advises retailers to take all of that into account when planning shelf layouts.
“Retailers should combine single-serve beverages, savoury and sweet snacks within or near other fixtures that facilitate multi-purchasing to maximise shopper convenience,” the report states. “It is also important to focus on impulse categories such as chocolate, candy and gum at other high-traffic areas, for example near the counter.”
Mondelez claims to be world leader in biscuits, chocolate, candy and instant beverages, and number two in coffee. It says that in the categories it operates in it accounts for 34% of Europe’s snacking market.
And it argues it’s driving snacking sales growth with new product development such as its Cadbury Dairy Milk Marvellous Creations, now worth £49.7m according to Nielsen. In biscuits, Mondelez developed Belvita to meet “a consumer snacking need at breakfast”. It says its children’s cake brand Barny is “a unique, fun and portion-controlled treat for mums to give to their children”.
In coffee it has developed what it calls “wholebean instant brands”, Kenco Millicano and Carte Noire Instinct, which it says allow consumers to make instant coffee with quality close to that served in coffee shops.
In cheese, its Dairylea Mighty Mature and Springy Onion flavours launched in April 2013, followed by the Dunkers flavours launch in June 2013. Its cross-category snack Philadelphia with Cadbury launched in January 2012 with a snack pack following in August that year.

£60bn Annual value of snacking categories’ sales in the UK

70% Proportion of adults who snack on the go