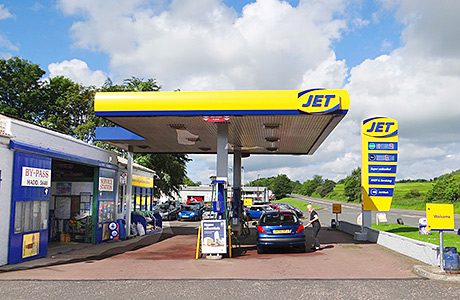 SIX months into the brand’s 60th anniversary year, the team behind Jet reckons there’s plenty in Scotland to shout about.

It says there’s a healthy pipeline of enquiries from sites looking to join the Jet brand. In particular, the company says, it’s forging ahead with plans to expand in the north of Scotland, and the bulk of enquiries are coming from dealers in that part of the country.
It has a network of 51 sites in Scotland. So far this year, says the firm, no sites have left Jet for another supplier and a third of the Scottish network has re-tied on a new long-term deal, and that includes a number of early re-ties.
The sites will be updated with Jet’s new image and uniforms.
The company says its Proud to be Jet standards and services programme, launched at the start of the year, is already delivering benefits to many of Jet’s Scottish dealers.
The programme is designed to boost the forecourt experience for consumers, improve facilities, ensure forecourt safety, reward dealers and instil a sense of pride in being part of the brand’s network.
Dealers are rewarded with ‘diamonds’ – linking in with JET’s 60th anniversary.
Of the 22 Scottish sites that have been audited so far this year, 16 have qualified for diamonds, including 12 top scorers.
Paul Yates, Scotland territory manager at Jet, said: “Our 60th anniversary year is proving to be very successful so far. The latest market stats from Catalist show that, with the exception of UK nationwide operators, we are now the major supplier to independent dealers in Scotland. Our dealer proposition has never been stronger and we would encourage independent operators to get in touch and find out why we are Scotland’s fuel supplier of choice.”