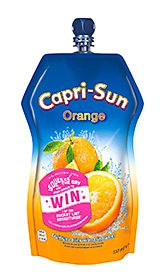 FLYING lessons, film premieres and swimming with dolphins are just some of the once-in-a-lifetime prizes on offer from Capri-Sun.

The six-month promo, called Squeeze The Day, is aimed at carefree consumers aged 20-30, the so-called millennium generation.
It will run on over 6m packs, including Orange and Apple & Blackcurrant standard 330ml packs, as well as Orange 330ml 89p PMPs.
Consumers find a code beneath an on-pack sticker and enter it on the Capri-Sun website. They’ll find out immediately if they have one of 100 pre-determined winning codes.