SWEDISH cider brand Kopparberg has listened to vocal fans on social media and added Raspberry as a permanent flavour in the range. 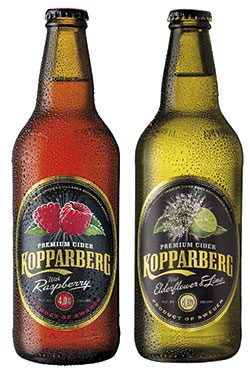 Previously it was only available during the summer. However, after a wave of comments on Facebook and Twitter, the company agreed to produce it all year round.
Jodie Alliss, brand manager at Kopparberg, commented: “Raspberry has been a popular variant for the last few summers and we’ve received really positive consumer feedback.
“We’re very selective about the variants we add to our range, but such was the demand for Raspberry that we ramped up production for 2014 straight away. We’ve got it ready in time for summer so drinkers can pour it over chunks of ice to enjoy the delicious refreshing taste as soon as the weather improves.”
First off-trade listing, for the 500ml bottle and four-pack of 330ml bottles, is Asda.
The Kopparberg range now includes five core varieties: Mixed Fruit; Pear, Strawberry & Lime; Naked Apple; Raspberry Elderflower & Lime; and Cloudberry.
Customer marketing manager Ben Turner said: “Elderflower is a big consumer trend right now, and we’re well placed to exploit it with our Elderflower & Lime variety. We’re driving distribution of Cloudberry.
“It’s a Nordic berry which is harvested in the autumn to make summer cider. You’ll hear us make a lot of noise about those variants this summer.”