ARE yogurts and dessert pots losing ground in the convenience channel? Two of the biggest players in the sector – Müller Dairy and Yoplait – cite different market research companies’ figures. The numbers and trends they report vary, possibly depending on the researchers’ definition of a convenience store.

But whatever the numbers, both producers feel that the impulse channel could be making more of the category.
Müller quotes Nielsen, which puts c-store sales of chilled yogurts and pot desserts at £56.5m last year. That’s a decline of 4.9% on the previous year. Yoplait, using IRI research, says overall sales are down but puts the sales in the convenience channel at £249m, up 11% by value and 7.3% by volume on the preceding year.
Müller is calling on c-store owners to take the category more seriously. Michael Inpong, Müller Dairy marketing and R&D director, said: “A staggering 43% of convenience store retailers don’t even stock yogurts or chilled pot desserts which should be a must-stock category.
“Some 96% of households purchase yogurts and chilled pot desserts, while 68% of shoppers say that dairy is the most important category when it comes to shopping in a c-store. Chilled items are now the most frequently purchased category in the convenience sector – more so even than newspapers.”
Inpong advises that retailers can minimise waste by stocking best sellers and merchandising carefully.
Yoplait convenience channel manager, Jon Rodriguez, puts the IRI figures showing stronger sales values down to there being fewer promotions and round-pound prices, and to smaller pack sizes and premium prices. He singles out flavoured big pots, natural yogurts and desserts as star performers in the category.
He also notes that multipacks have been increasing their share in convenience and now account for 52% of the sales, against 50% in 2012. He advises grouping together various yogurt and chilled dessert products that could be likely to be bought by the same shopper.
After its strong performance at the Product of the Year 2014 awards, Müller has badged its winners with the Product of the Year logo. It will appear on Müllerlight Turkish Delight, Müller Corner de Luxe After Dinner Mint and Marc de Champagne, and Müller Kids Corner Lots of Love. NPD includes a new exotic Müllerlight limited-edition flavour – Coconut With a Hint of Lime.
The Corners range is said to remain the category leader according to Nielsen, ahead by £12m. Value sales currently stand at £230m.
The latest addition to Müller’s tie-in with Cadbury’s chocolate is a limited-edition Marvellous Mix-Ups Cherry Cola Fizz. The RRP is 79p. There’s also a Cadbury’s Roses tie-in, called Strawberry Dream. RRP for a two-pack is £1.29; a four-pack is £2.49.

Yoplait is particularly strong on children’s products, quoting SIG figures that show it has more than 57% the UK kids’ sector overall and 65% in convenience.
It says its best performing lines are Wildlife Choobs £1 PMP, Peppa Pig £1 PMP and Petits Filous Strawberry & Raspberry. Recent NPD includes Moshi Monsters Big Pots £1 PMP.
Yoplait has a two-tier promo strategy for convenience. Petits Filous, Frubes and Weight Watchers regularly appear at a reduced price point such as £1 or half price. Then there is a core range of £1 PMPs available all year.
“We find that many retailers will only list certain lines when they are on promotion, which causes confusion and disappointment with shoppers,” said Rodriguez. “To combat this, all Yoplait PMPs are priced at £1.”
Yoplait PMPs come in half cases to help retailers avoid waste. Rodriguez says that Yoplait has done everything possible to help c-stores sell more pots. “If a retailer is not stocking a Yoplait PMP then they are missing out on sales,” he said. 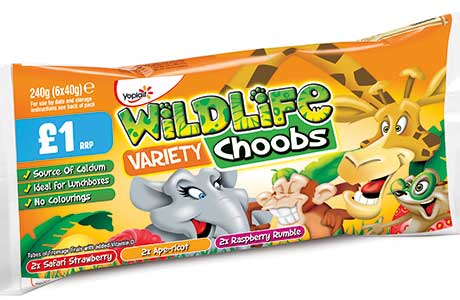