COCA-COLA is celebrating the World Cup by giving away a million limited-edition footballs across Great Britain in the run up to the tournament.

The “Win a Ball” on-pack promotion will feature on take-home packs of Coca-Cola and Coke Zero. As well as boosting sales, the promotion aims to help the sporting charity StreetGames. The company will donate 10p for every valid entry.
The promo, which runs until 13 July, will be supported by a TV, digital, outdoor and print campaign focused on the power of football and how one ball can inspire people everywhere to move.
It will run on the 1.25-litre, 1.75-litre and the six-, eight- and 12-can multipacks.
During the 2010 World Cup, the soft drinks category outperformed total food growth by 2.2% according to Kantar.
Nick Canney, VP sales and marketing at Coca-Cola Enterprises, commented: “This summer represents a strong sales opportunity for retailers. Matches will take place when people are typically at home and looking to celebrate the games together with friends and family, either as part of an evening meal or by throwing a themed party.
“The Win A Ball promotion and our wider 2014 FIFA World Cup activation plan will help provide our customers with the support they need to boost soft drinks sales in the run-up to and during the tournament.” 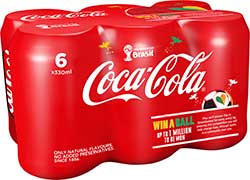 • CCE has a new slimline 250ml can in time for summer. The company says this gives customers Coca-Cola at a lower cost, in a smaller format, suitable for impulse purchases. CCE recommends stocking as many different sizes and formats as possible, to suit every individual consumer’s individual needs.