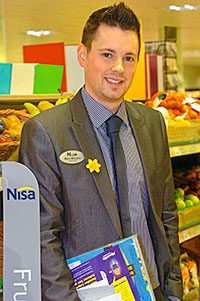 • Marc started working at the store as a paperboy aged 13. He moved to the shop floor at 16, worked on the tills from the age of 18 and became a supervisor at 19. He was promoted to manager in August 2013 aged just 24.
• He didn’t plan to work in retailing, he studied computing at college and got straight As, but he decided against university and stayed at the store.
• When he started at the store it was owned by his uncle. Iain Wilson, the current owner, took over the store in September 2011. It has since won several awards.
• Marc comes from a retailing family; as well as his uncle having owned the Perth Road store, Marc’s mum manages Iain Wilson’s other store, a Nisa Local in Broughty Ferry.
[hr]

IT’S little wonder that when Marc McCabe takes deliveries out to elderly customers from the Nisa Extra store on Dundee’s Perth Road, they invite him in, make him a cuppa and send him away with a fridge container full of home-cooked goodies for dinner.
Because 24-year-old Marc has become like a grandson to some, delivering their shopping and staying for a chat, no matter how busy he is.
That openness and willingness to give customers his time helped him take the title of Scottish Grocer Employee of the Year 2014, run in association with British American Tobacco.
Despite his youth, Marc has almost a decade of experience in the retail industry, having started in a business that previously owned the Perth Road store as a paperboy aged 13 before moving up through the ranks, under two owners, to his current position as store manager.
In Marc’s earliest days at the shop it was part of a family business owned by his uncle.
In September 2011 Iain Wilson, one of the store’s current owners, took over. Before long Marc was running the show.

At 8,000 sq ft the Nisa Extra store, twice the winner of City Store of the Year (in 2013 and 2014), is the size of a small supermarket. Being in charge is no easy task, but Marc’s experience and dedication has been key to the shop’s success.
He said: “One of the things I was told when Iain took over was that he bought the business so that he could spend more time with his family.
“I try to bear that in mind and not to get him involved if possible. The thing about this job is that the buck stops with me, and I like that. I’m paid to be stressed out so that Iain isn’t.”
Iain nominated Marc for the award after becoming impressed with his new manager’s dedication, innovation and self-motivation, within a few months of working with him.
Iain said: “When we knew as owners that we were going to be buying the other store in Broughty Ferry and that we needed a different structure in place here, Marc was the obvious candidate for store manager.
“We knew he would do a good job, even though he’s young, because of his knowledge of the workings of the store. His pro-activity and his ideas were a bonus.
“The greatest thing for me is the fact that I know that if there are problems or issues they are going to be dealt with. Marc only comes to me when he really needs me for something … or there’s a cheque to sign!
“One example was in Marc’s first week or two as manager, when we had the food-to-go section at the back.
“We didn’t realise that there were specific guidelines for the disposal of cooking oil. We weren’t doing anything wrong but we didn’t know there is a more efficient way for us to dispose of it or that we weren’t necessarily doing it the best way.
“One day I came in to speak to him and he’d organised the whole thing, how it should be disposed of, how much it would cost and that was it. It was a problem that I didn’t even know about and it was just solved.”

There’s also Marc’s relationship with the customers that marks him out as a top employee. Not afraid to muck in, he does the delivery run twice a week, taking shopping to customers who can’t get out and about.
He said: “We’ve got a couple of elderly customers who have been getting deliveries from us for as long as I can remember, some of them are like grannies to me.
“We have one customer who doesn’t leave the house. We’re basically her lifeline when it comes to her messages.
“When I go up I always get a wee bit of a chat and a cup of tea because she doesn’t get many visitors. She’s a lovely cook as well, sometimes she’ll send me away with Tupperwares of food for dinner.”
That friendly manner and positive attitude has had an impact in the store too. Despite working more than 50 hours a week, Marc still finds time for a blether.
“We’ve got a variety of customers,” he said, “some of them have been coming here for as long as I remember. I know everything about them because they all come in for a gossip.
“It’s a really good local feel in the store despite the size. That’s what we’re aiming for, to provide people with that all-round shopping experience but also that sense of community where they can come in and know everyone on the till.
“There’s no such thing as a typical day here. I usually get in at about 5:45am. After I come in I do the ATM and then cover the till.
“I have so much going on during the day, my head is constantly buzzing. I like to take at least half an hour and just wander around the store, listing what needs to be done.
“I try to be organised, it’s the only way to go. Especially when there’s so much going on.
“The highlight of my career in the store so far has to be winning my award,” he said. “It was really good just to get some recognition. Iain nominated me, which was a bit of a surprise, but it was even more of a surprise to win!
“Honestly I don’t feel like I’m doing anything out of the ordinary. I just feel lucky that I love my job.” 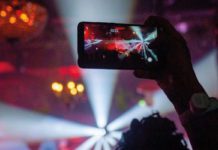 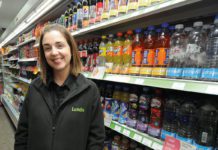