NEW work on its low-calorie brands and significant developments on pack formats make up some of the work being carried out by Coca-Cola Enterprises on its soft drinks range in the first half of 2014.

Trade communications manager Dave Turner said: “Coke Zero sales have increased by over 22% in the last year and we have looked to build on this growth with an increased focus on the impulse channel. The brand has been repositioned this year with a new edgier direction as part of its ‘Just Add Zero’ campaign, launched at the start of the year “ 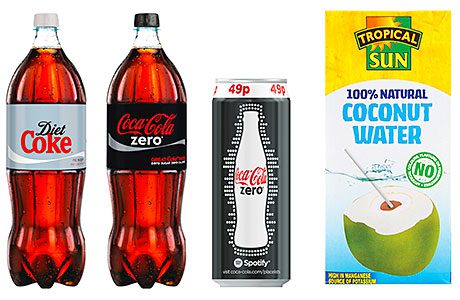 The 1.75L Coca-Cola portfolio, which includes Coke Zero and Diet Coke, offers an ideal size for shoppers looking to take home some Coke for a football night during the World Cup, he said.
“In terms of immediate consumption formats, the 250ml slimline can we introduced on our Coca-Cola portfolio has performed extremely well since its launch in July last year. Over 5m cans were sold by the end of October last year and it has already added more value to the soft drinks category than any other soft drink format in indies and symbols since the start of the year. Where possible, we recommend retailers stock this alongside 330ml and 500ml Coke formats.”
• Tropical-flavoured soft drinks deliver great sales, says Jag Singh, brand manager at Tropical Sun Foods.
“The trend is only set to continue this year, as Brazil comes under the spotlight and the world arrives in Glasgow for a fantastic summer of sport.”
The company’s tropically inspired drinks include its carbonated range Tropical Sun Splash, which includes Pineapple, Fruit Punch and Grapefruit flavour.
“But tropical drinks don’t just include carbonated products,” said Singh.
“As well as our Coconut Water, for which we have now launched a new 100% Natural one-litre Tetra Pak, we recently launched an Aloe Vera drink in 1.5-litre and a 500ml bottle.
“It has already proved to be one of our fastest selling new product developments of the last few years. Containing real aloe vera gel, vitamin C and calcium, it meets a number of consumer flash points, as well as delivering a delicious and unique flavour to the market,” he said.