ONCE upon a time folks used to talk about the “sports and energy drinks category”.

But then energy drinks began to pull away from their sporting cousins, even in Olympics year the sports drinks performed relatively poorly compared to straightforward energy drinks.

But now, while functional and energy drinks still continue to soar, there are very real signs that sports products are back. The Britvic Soft Drink Review 2014 listed sport drinks’ value sales in impulse outlets as flat at £89.1m, with growth of 0%.
But volume sales were up 4% to 47.1m litres – all told a much better performance than in previous years.
Quoting IRI figures, Red Bull says sports and energy drinks are showing growth of 7% a year with a forecast of further growth for the next three years.
However the firm says that functional drinks are still driving the growth with an increase of 10% a year.
Red Bull reckons the introduction of new flavours and styles have helped attract new drinkers.
“Functional energy is continuing to drive growth through mainstream positioning and proactive energy consumption everyday whether it be at uni, work or on the field,” said Gavin Lissimore, Red Bull head of category marketing.
Sugar-free options have, he says, broken down a key consumer reason for avoiding energy drinks.
“Red Bull Zero Calories addresses the message of positive everyday energy whilst removing the sugar and calorie barrier for the consumer.”
But what of those sports drinks? Are they really on their way back?

• Lucozade argues education about the performance benefits of sports drinks is the way to build on what it sees as a distinct turnaround in the sports drink category. Brand owner Lucozade Ribena Suntory says it saw a return to growth in 2013 after several years of decline.
“Lucozade Sport will keep category-leading investment across TV, press and digital, in addition to product sampling for those who are actively taking part in sport and exercise, so they can personally experience the benefits of an isotonic drink like Lucozade Sport on their endurance performance,” said Georgina Thomas, category director at Lucozade Ribena Suntory.

“With 2014 being a big year for sports, we are confident that by working in partnership with retailers to execute our exciting brand plans, we can replicate the 2010 World Cup levels of category demand.”

• Coca-Cola Enterprises (CCE) reckons energy drink consumers do appreciate a healthier option among energy drinks. On the other hand, they say they don’t want healthy messages emblazoned all over their cans.
“We are investing in our Relentless range in 2014 by launching a new refreshing cherry variant and re-launching our sugar-free alternative with a bold new packaging and name, Relentless Origin Ultra, as part of a programme of innovation to grow the brand,” said Dave Turner, trade communications manager at CCE.
“The new name and refreshed packaging in a strong silver and white design targets the brand’s core audience of 18-30 year-olds. The move responds to consumer feedback that, while shoppers enjoyed the benefits of the sugar-free variant, they would prefer it if the low-calorie message wasn’t communicated so obviously on-pack.” 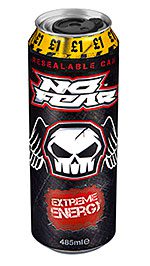 •  Vimto’s sports and energy range, Extreme, is now listed in Tesco. The brand also has a new sponsorship and distribution deal with one of the biggest indoor skateparks in the UK, Ramp1 Skatepark in Warrington. Sampling will take place at extreme sporting events.

• For energy brand No Fear, it’s all about flavours. “In the last year there has been an explosion of flavours in the energy drinks market in a bid to meet consumer demand and attract potential customers that don’t currently buy energy drinks because of their taste,” a spokesperson said. “Original flavour is still a must-stock, however.”