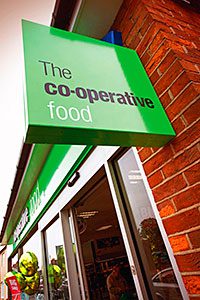 THE Co-operative Group had a “disastrous” year, losing £2.5bn. Interim CEO, Richard Pennycook, described the group’s results as “a wake-up call to anyone who doubts just how serious the challenges we face are,” as he announced its delayed annual results.

Most of the cash haemorrhaged from the Co-operative Bank, which lost £2.1bn and had to be rescued by its bondholders in December. The group has also written down the value of the Somerfield chain, bought in 2008, by £226m. The Co-operative now plans to dump the struggling, larger stores, amounting to 60% of the former Somerfield estate, and retrench in the village and high street locations which work well for the group.
“2013 was a disastrous year for the Co-operative Group, the worst in our 150-year history,” Pennycook said. “Today’s results demonstrate that but they also highlight fundamental failings in management and governance at the group over many years.”
Food sales showed an operating loss of £35m, with like-for-like sales down 0.2%. However, within the group’s convenience stores, like-for-like sales were up 1.6%. Pennycook reaffirmed the Co-operative’s commitment to the convenience sector, promising more new store formats and a rapid programme of refit and renovation. He estimates that, by the end of 2014, three-quarters of the food estate (which totals 2,779 stores) will have been refreshed since 2012.
The group opened 32 new convenience stores last year, many of them in London, and has another 32 units under contract for this year.
The Co-operative’s five-year recovery strategy, called True North, has seen the group reduce prices across the 1,000 lines that were seen as most uncompetitive.