THE latest soup to hit the chiller shelves of the nation is making the most of its Caledonian connections. 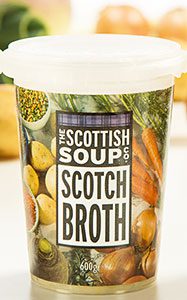 William Sword, manufacturer of pies and pastry, has launched its new brand The Scottish Soup Co, starting in Scotmid.
Brothers David and Douglas Sword – the latest generation to manage the family business that was founded in 1894 – reckon they spotted the gap in the market for chilled Scottish soups in Scottish shops.
They say the Scottish Soup Co soups, which include Lentil, made with ham stock, Chicken and Rice, and Scotch Broth from a lamb stock, are made to their mum’s traditional Scottish recipes.