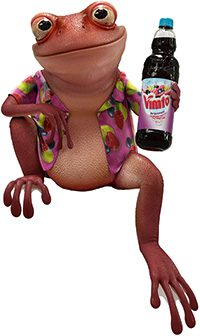 Vimtoad, a cheeky northener who “persuades” a mum to buy the drink, is part of a Vimto’s drive to boost sales of its squash, carbonated and still drinks. The idea is to encourage mums to buy them for their kids. The new messages coincide with the expansion of the brand’s no-added-sugar lines, including a 250ml sportscap mini for lunchboxes and a 50ml liquid water.
New brand packaging, on-shelf this month, emphasises Vimto’s three-fruit flavour (grapes, raspberries and blackcurrants) and no-added-sugar message.
Vimtoad will feature across TV, radio, social media, sampling and digital activity from 26 April. The 30-second advert will be shown on ITV1, E4, Sky 1 and SkyLiving, during programmes that both mums and teens watch, such as Britain’s Got Talent.
This will be followed by three different radio adverts, running from 12 May.