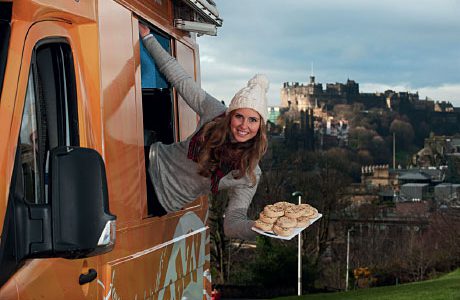 MAYBE we’re just not daft about afternoon tea, or perhaps we simply haven’t developed the habit, but it seems Scots are letting the side down on crumpet consumption.

Bakery giant Warburtons says Kantar data shows that in the 52 weeks to 2 February 2014, total crumpets penetration (the proportion of the population eating crumpets at least once in the year-long period) in the UK hit 61.8%.
But in Scotland crumpet eating was indulged in by just 34.8% of folks.
And, apparently, deep research found a reason for our crumpet reticence. We don’t toast them?
So, now the bakery firm is on a mission. It’s travelling the land of Burns and bringing toasted crumpets to the masses.
Warburtons has teamed up with The Ice Cream Alliance, and transformed some ice-cream vans into toasted crumpet wagons. And the Warburtons crumpet team has been toasting and topping the hot snacks in Glasgow, Edinburgh and Inverclyde.
Megan Harrison, portfolio and brand director at Warburtons, said: “As the market leaders of crumpets in the UK, we are investing in this activity in Scotland to drive awareness and growth of this much loved product, which is best served toasted and topped.”