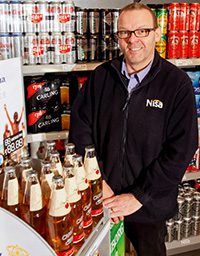 • Terry had previously been in the fast food business (fish and chip shops) in the Linwood area.

• He and a business partner developed the Nisa Extra store on a site that was previously part of the adjacent pub.

• The store opened in November 2011 and has seen turnover grow consistently since opening. It serves a diverse community, which includes many young families, all other ages groups and some people from Poland and other European countries.

• Nisa deals and promotional leaflets are very popular and draw customers from beyond the immediate area. The business has extended its storage areas to be able to bulk buy promotional stock.

GREAT beer venues can take many forms – specialising in anything from barbecue-essential lagers to oak-aged craft ales.
But the Nisa Extra in the Renfrewshire town of Linwood, just off the M8 close to Glasgow Airport, has successfully taken the temperature of its local beer market … and it’s chilled, very chilled.
There’s little doubt about which is the most talked-about area in the shop. It’s a glass fronted area with an automatic door that has its own special climate, is known as “The Cave” and contains wine, cider … and lots and lots of beer.

The Cave, and its perfectly kept and presented stock of chilled beer was one of the main reasons that judges in the Scottish Grocer Champion of Beer Award, organised in association with Molson Coors Brewing Company, declared Nisa Extra, Linwood the Champion of Beer for 2013. The large chilled room has been an important part of the store since it opened in November 2011. And Terry’s honest enough to admit that the idea was ‘borrowed’ from another shop he had seen when he was carrying out his original research.
“We were out doing our nosey, looking at some Spar stores and some Nisa stores when we were still deciding who to go with.
“At one store we were in less than two minutes before we saw their beer cave. Immediately I thought ‘that’s a fantastic idea, we’ve got to have that’.
“We came back and more or less tore up everything that we had planned. We flipped the entire store.”
The Cave is positioned inside the back wall of the large shop’s trading area. It faces the front entrance and is close to the tills so it’s highly visible from the most important parts of the shop.
It forms the anchor area of the designated alcohol zone. Between the room and the tills there’s ambient-temperature shelving that houses red wine. And running down the outside edge of the right-hand edge of the giant chilled box are shelves normally taken up by soft drinks but that are part of the designated alcohol area and therefore able to be used for extra drinks stock at busy times like Christmas and major football tournaments.

Though white and rosé wines ciders and RTDs all feature in The Cave, pride of place is given to beer.
The Cave gives the 5000 sq ft shop the best of both beer worlds. It offers cold beer all through licensing hours, just like any other well-organised convenience outlet – utilising one of the key advantages that c-stores have over giant multiple grocery stores. But it also means it can stock a full range of pack sizes, everything from four-packs to 18-can cases that give customers instantly cold beer in the sort of quantities that suit a party or a summer barbecue.
But, while The Cave is the customer-facing part of the shop’s beer offer, it is, as Terry and his colleague Amanda O’Hara explained, just part of an overall beer system that includes Nisa beer offers, POS and promotional material, substantial back-shop storage, social media and more.
“The deals are very popular,” Terry explained. The six weeks for Christmas had deals where we were as cheap or even cheaper than the big guys.
“Margins are lower but volumes are higher and it brings people into the shop.”
But since opening the store Terry has added more storage twice, re-assigning space and building an extension. Much of the new storage space is given over to alcohol and a great deal of that is extra beer stock bought on the deals but able to be kept in reserve to be sold once the deal is off.
“It means you can finally make some money on them,“ Terry explained.
But it also allows extra price flexibility, Amanda said. It allows the store to do its own deals on brands that it knows are popular with its customers.
Point-of-sale material, which cannot be used to dress the main shop’s windows because of alcohol marketing restrictions, can be used on The Cave’s door and glass wall.
So what are the beer favourites among Linwood Nisa Extra’s customers?
Well the big names do well – brands like Tennent’s Lager, Bud, Carling and Foster’s.
But Terry has seen increasing sales of Coors Light in recent times. It is a lager that’s heavily marketed as a great beer to drink cold.
But many other brands do well on promos and Terry notices that even beer fans who are fiercely loyal to a single brand will switch between pack sizes to grab whatever deal is available.
Craft beer and traditional ale in glass didn’t do well and is no longer stocked. It may be setting the heather on fire in other parts of the country but Linwood ale fans prefer cold cans of McEwan’s Export.
One thing that has gone down well, said Amanda, is Carling Zest the lower alcohol beer with added flavourings.
Among beers of foreign origin Corona and Peroni have been selling well. And spirit beers like Desperados are also proving popular.
Terry’s beer wish for the coming year is simple.
“Give us a good summer and The Cave will do the rest,” he said.

• More development is planned, including moving the local Post Office into the store