TETLEY, Scotland’s best-selling branded tea, and its Tetley Tea Folk are back … perhaps from outer space. 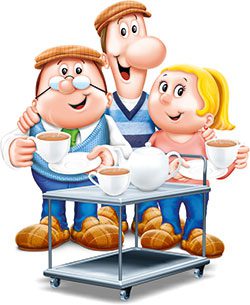 The brand owner has kicked off its marketing work for 2014 with a new Tetley Tea Folk TV ad, as part of a £1.8m marketing push.
In the ad, two of the Tea Folk – Gaffer and Sydney (voiced by David Schofield and Stephen Tompkinson) – find themselves in the middle of an alien invasion of London. Luckily the arrival of a cup of Tetley manages to save the human race.
The company recently extended its range, adding herbal drinks and redbush tea, in an attempt to attract new fans and give existing consumers something new.
Andrew Pearl, director of customer and shopper marketing for Tetley, said: “The new advert is great fun and allows us to harness the appeal of the Tea Folk and communicate the role of tea as the social glue that brings us together.
“It also provides the backdrop for us to have a more visible presence in store.
“We will be employing a mix of techniques to make the market sit up and take a fresh look at Tetley and what it offers to shoppers and retailers alike.”