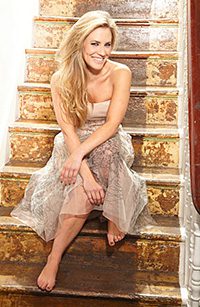 SPORTS TV presenter Georgie Thompson will deal with a host of champions next month when she presents the Scottish Grocer Awards on 13 March.

Georgie will join Scottish Grocer and sponsors from the food and drink industry’s leading companies and organisations in recognising the best in Scotland’s community retailing scene at Glasgow’s five-star Hilton Hotel.
Previously a Sky Sports News presenter, she also hosted the network’s F1 Show and A1 Grand Prix series and was a regular panellist on Sky 1’s A League of Their Own. She’s written a novel, The Twitter Diaries, with Imogen Lloyd Webber and has appeared on Dermot O’Leary’s Radio 2 programme and ITV’s This Morning.
Georgie now lives in New York and presents Crowd Goes Wild, a US discussion show on Fox Sport 1.
The build-up to the Scottish Grocer Awards 2014 has begun. To be sure of your place at the trade’s best night out, book your places early.