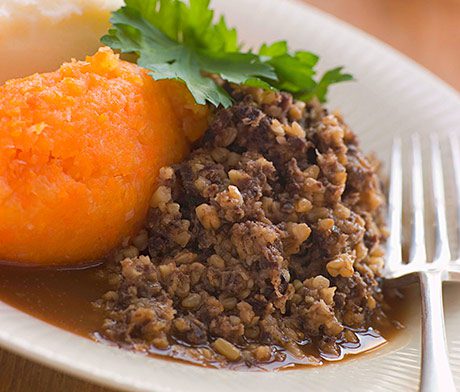 THE institution of the Burns Supper, now an annual celebration of the works of Scotland’s – and one of the world’s – great poets, Robert Burns, began in the very early 19th century.

In 1801 some chums who were great admirers of the recently departed Rabbie, and who were also pretty fond of a dram, met on the fifth anniversary of the great writer’s death to wine, dine, toast his memory and recite some of his works.
The following year the celebration moved to the date of the bard’s birthday 25 January and the rest as they say is history. The Burns Supper habit spread across Scotland. Within a few years a Burns Supper was being held in Oxford University. Today they are held all over the world.
These days formal suppers can be quite posh with a multi-course dinner, a piper, a toast to the immortal memory of our great literary hero, a cheeky toast to the lassies, an even cheekier reply from the lassies, an address to the haggis and a recitation of Burns’ great narrative poem Tam o’Shanter.
Other celebrations in homes and elsewhere are often much simpler.
But virtually all will include two items that retailers can highlight in Burns season each year … haggis and whisky.
It’s sad that, because of marketing restrictions on alcohol products in Scottish off-trade outlets, it’s effectively impossible to cross-promote the two Burns Supper essentials or even to place them together in a display.
But that’s all the more reason to promote them individually.
Try highlighting haggis in your meat chiller, carry a few different sizes to suit the variety of sizes of households, use point-of-sale material to remind shoppers of Burns Night and the part that haggis plays in the celebrations.
And you could make January a special malts month or simply arrange to focus on whisky generally in your drinks area. If you have a whisky deal that’s giving you a good margin highlight it within your drinks section.
And creating a Burns theme in store, with tartan and maybe even pictures of the man himself, will help get the message across.