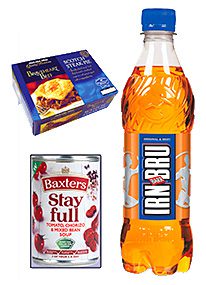 IT’S known as Scotland’s other national drink and the mighty flavoured carbonate Irn-Bru has maintained its position as the most valuable Scottish non-alcohol brand to go into Scottish consumer homes.

The AG Barr-produced brand is once again in number-one spot in the Kantar Worldpanel top 40 Scottish take-home brands in Scotland, in the non-alcohol division, prepared for Scottish Grocer.
But there’s a new brand in 2nd position. Meat product and pies producer Malcolm Allan jumped from fifth place last year.
It’s the latest evidence of strong growth at the central Scotland meat processor which has significant business with the major supermarkets and is targeting growth in convenience following the move to its new processing plant.
There were strong performances also from Bells Pies, Graham’s the Family Dairy, Simon Howie, Nairn’s, Marshalls, Great Scot, Scotty and Brownings.
Glen’s Vodka is, once again, the most valuable Scottish alcohol brand in Scottish take-home, and a number of malts and the specialist beer firm Innis & Gunn also did well.