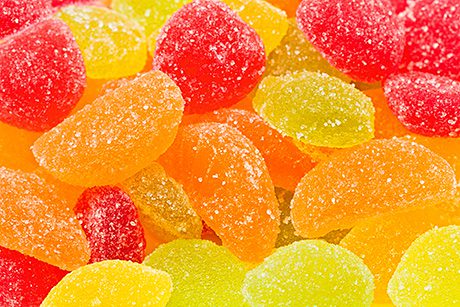 CHOCOLATE has long been the dominant player in the confectionery market.

But it’s sugar confectionery that is flavour of the moment. It may only be one third of the total market but in 2012 it grew at a faster pace than chocolate for the second year running, according to a comprehensive report by Key Note. Gums and jellies, especially sour varieties, are leading the charge, with new sharing formats, themed special editions and novelties all helping sales.
Other forms of sugar confectionery, such as chewing gum and bubble gum, are showing modest growth, while mints is the only sub-category that’s in decline.
The total confectionery market was worth £5.51bn in 2012. And while it has grown by 15.8% over the last four years, the increases slowed in 2012 and much of the growth, according to Key Note researchers, has been down to price inflation.
Sugar confectionery actually declined in value in 2009 but, since then, it has grown to £1.44bn. Its share of total confectionery sales, having been in decline since 2006, began growing again in 2012. Last year it increased its market share by 0.2% so that it now takes 26.2% of the overall confectionery market. Fruit sweets form the largest sub-category, accounting for 41.8% of sugar confectionery value sales. Chewing and bubble gum takes 26.1%, mints 12.4% and all other sugar confectionery – such as cough sweets and toffees – account for 19.7%.
Overall, between 2008 and 2012, the value of the sugar confectionery category increased by 11.4% to £1.44bn. The growth was fuelled both by retail price increases and consumers’ growing demand for non-chocolate sweets, particularly fruit sweets, the Key Note report said.
Fruit sweets performed strongly in 2012, rising in value by 3.8% to £602m. Key Note puts that down to special editions produced for the Queen’s Diamond Jubilee and the European Football Championship. Sours were particularly buoyant, worth £46m and growing at 15% year on year. Gum-based sweets now make up nearly half of all sugar confectionery value sales.
Key Note identifies Haribo and Skittles as star performers. It says Haribo grew 8.3% over the past year, and that Starmix is its best-seller, followed by Supermix and Tangtastics.
Skittles, owned by Wrigley, is said to be the fastest-growing fruit confectionery brand.
Starburst is, says Key Note, the largest fruit sweets brand, worth around £20m.
Chewing and bubble gum is worth £367m, up 2.2% in 2012. Gum chewers still go largely for mint – Key Note observes that sales of Trident, with flavours such as strawberry and lime, fell by around 25%. Hubba Bubba is the leading brand of bubble gum, accounting for nearly half of all sales.
Mints is a declining category, falling by 0.6% to £179m in 2012. Key Note puts that down to a consumer preference for gum and predicts further decline to come.
Other sugar confectionery grew by 1.4% in 2012. The sub-category includes toffees, medicated sweets, Jelly Belly and retro lollies and chews produced by companies such as Swizzels-Matlow.
However, market penetration of all types of sugar confectionery is falling, Key Note found. In 2010 some 58% of all adults consumed mints but by 2012 that was down to 54.7%. For chewing gum the 2010 figure was 45% but that dropped to 40.8% last year. And for all other sugar confectionery the 2010 proportion of all adults who consumed was 65% but it dropped last year to 62.5%.
Women eat more sweets than men. Chewing gum is the only product that is equally popular among men and women. Confectionery consumption reduces with age – unless it’s a mint. Consumers aged 65 and over were more likely to have sucked a Pan Drop or a Polo than any other age group.
Key Note predicts that the overall confectionery market will continue to grow, rising by 7.7% in the period until 2017. But it expects sugar confectionery to beat the market with an increase of 9.3% to reach an annual sales value of £1.62bn in that period.
By the end of the five years sugar confectionery is forecast to increase its market share by 1.4 percentage points to just under 27% of overall confectionery sales.