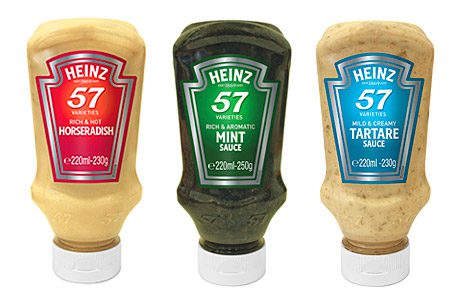 In stores from late last month, the development means the flavours have become available to consumers through retailers for the first time.
The company says the extension is designed to increase overall category sales of sauces. It argues that the newly available lines offer consumers ways to liven up mealtimes and add a classic twist to favourite everyday dishes.
While Heinz 57 Horseradish Sauce is new to store shelves it’s actually a long-established Heinz product. First sold in 1869, horseradish was Henry J Heinz’s first variety and was based on his mother’s own recipe. And while the new Heinz Horseradish recipe has evolved since then it still combines the taste of horseradish with a subtle and fiery kick, the firm says.
It describes Heinz 57 Mint Sauce as “a rich and aromatic mint sauce, which will complement lamb perfectly whether in a roast or on a sandwich” and says Heinz 57 Tartare Sauce is “a mild and creamy sauce which will be ideal for those fish finger sandwiches”.
With an RRP of £1.49, the new flavours come in a 220ml squeezy bottle with a top-down lid.
Olivia Hibbert, Heinz 57 Sauces range brand manager, said: “Heinz has been a firm family favourite since 1869, so we’re really excited about bringing the signature Heinz quality and taste into even more classic family dishes through the launch of Traditional Condiments from Heinz.
“Not many people know that horseradish was the first ever variety that Henry J Heinz himself launched way back in 1869, so we are in many ways bringing back a piece of Heinz’s early heritage.”