POT Noodle, a grab-and-go staple aimed at students and young men, has extended its footballer’s wife ad to push a new flavour. 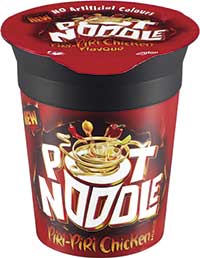 Brian, the chunky bearded chap who married a footballer and became a WAG in 2011, is back to promote Piri-Piri Chicken Pot Noodle in a £1.4m campaign which started this summer. As well as TV slots, there will be gaming, video and print ads.
Pot Noodle’s Alex Mellor said: “We are really excited to be launching such a wide-reaching and integrated campaign that directly targets Pot Noodle’s core audience of 17-24-year-olds.”