MORE than 6,000 UK convenience stores could close if cigarettes are forced to be sold in plain packaging in the legitimate tobacco retail trade. According to a study carried out for tobacco company Philip Morris by the Centre for Economic Business Research, up to 30,000 shop assistants could lose their jobs as shoppers turn to supermarkets, duty-free shops while travelling, and to illegal traders, to buy their tobacco.
Using evidence gathered in Australia, where plain packaging was introduced last year CEBR predicts that queues will lengthen and the time taken to buy tobacco products will increase. And that’s likely to drive all types of customers to larger stores, where transaction times may be faster.
The report estimates that there will be a loss of revenue, from tobacco sales and from associated purchases, of over £300m from small independent retailers – a reduction of 19%. With retailing already under pressure from squeezed disposable incomes, the analysis views it as inevitable that businesses would close. The CEBR study estimates that 6,400 would not survive.
Douglas McWilliams, CEBR executive chairman and co-author of the report, said: “Convenience stores depend heavily on tobacco sales and the associated spending by those 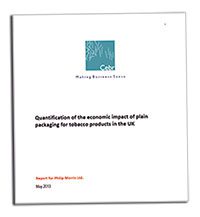 who drop in to buy cigarettes. All the survey evidence and simulation exercises available suggest that plain packaging would cause spending to move to illegal street vendors, larger stores and purchases from abroad. If this is replicated in real life, High Streets up and down the country would be dealt a body blow.”
As well as jobs being lost in shops, CEBR estimates that between 2,250 and 3,850 jobs would go in the tobacco manufacturing industry and as a result of the multiplier effect on the wider economy. Tobacco’s contribution to GDP would drop from its current 0.84% to between 0.78 and 0.81%.
In those circumstances the Exchequer would lose between £219 and £348m a year in tax revenue. That hit on public finances would be in addition to any compensation that the state might be forced to pay to tobacco manufacturers for the loss of brand value. City analysts have estimated that to have a potential cost of between £4 and £5.5bn.
The UK Government has carried out a consultation on the issue of plain, or standardised, packaging. The Scottish Government has signalled its support for a move to plain packs and the measure also has strong support from health organisations and lobbyists. The tobacco industry and others oppose it on several grounds and argue that standardised packaging would make life easier for illicit traders.
The UK Government did not include legislation concerning standardising tobacco packaging in the recent Queen’s Speech.