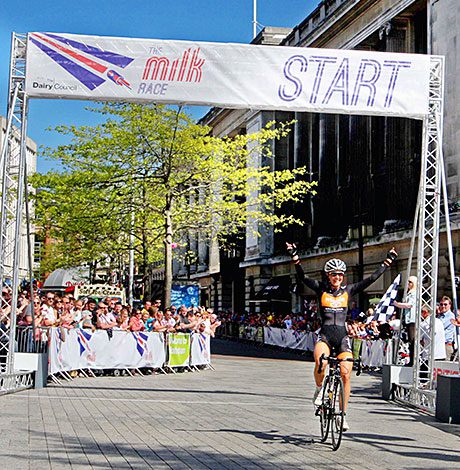 Held in Nottingham, it was the first time in 20 years that the event, once a high-profile element of milk marketing in the UK, had been run.
Riding around the city-centre course for the Rapha Condor JLT team, English battled with Team Raleigh’s Alex Blain to take the men’s title.
Meanwhile, Dani King claimed the first ever women’s Milk Race title for Team Wiggle Honda.
The Milk Race, which ran between 1958 and 1993 until the Milk Marketing Board was disbanded, was resurrected this year by industry bodies the Dairy Council and the Milk Marketing Forum.
Sandy Wilkie, chairman of the Dairy Council, said: “The Milk Race of old was a superb sporting spectacle, but today’s events easily matched those of previous years. Our congratulations go to Felix English and Dani King, and here’s hoping that, if further funding can be secured, we can re-establish The Milk Race as a permanent fixture in the British sporting calendar.”