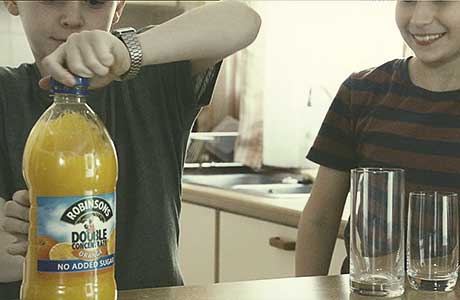 ROBINSONS, the UK’s favourite squash brand, according to Nielson Scantrack, has a new TV advert for 2013. On screens until September, it focuses on two lively wee boys, and follows them through an exhausting day of having fun.

At the end, they glug two glasses of Robinsons Orange No Added Sugar Double Concentrate. When one boy falls asleep in front of the telly, the other carries him to bed. The advert then reveals that the boy doing the carrying is in fact a father. His friend is his son.
The advert’s tagline carries the message: “It’s good to be a dad. It’s better to be a friend.”

Although squashes have been around for a long time and experienced a 1.8% value growth in 2012 according to the latest edition of the Britvic Soft Drinks Review, they have declined in volume sales. Britvic puts that down to the success of double-concentrates, which means people buy squash less often.
• Robinsons Fruit Shoot has a new promotion, called Get Your Skills On, to help youngsters try new activities. Run in conjunction with Nickelodeon and The Sun, it will include TV advertising, an on-pack promotion and a roadshow as well as PR and a social media campaign.