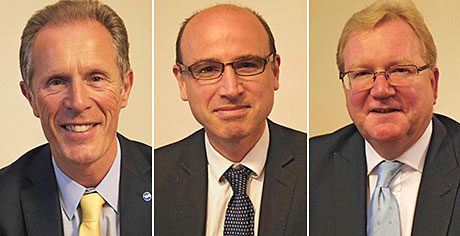 IN roughly 15 months time residents of Scotland will decide Scotland’s political destiny when they vote in the referendum on independence.

And trade group the Scottish Grocers’ Federation took the issue to its members when it organised a special debate in Edinburgh – very close to Scotland’s Parliament.
Chaired by BBC Scotland journalist Raymond Buchanan the special event heard from Blair Jenkins, chief executive of Yes Scotland, Jackson Carlaw MSP, for the Better Together campaign and Eddie Barnes, political editor of Scotland on Sunday. The two campaigners gave their different views on the future of Scotland. Political journalist Barnes said how he thought things were going so far and then all three answered questions from the floor.

Arguing the case for independence Jenkins detailed the Yes campaign’s view that Scotland was different, that independence would allow the country to deal much more readily with its own affairs, and that the Scottish economy could be liberated by allying the country’s talent to its substantial natural resources and its potentially world-leading assets in, among other things, high-quality food and drink.
But Jackson Carlaw likened the position that many Scots now found themselves in to partners in a contented marriage who had been forced to consider divorce.
The movement for independence could promise nothing but uncertainty and seemed to assume that the rest of the UK and indeed the rest of the world would be benignly supportive of Scottish disruption to existing relationships and institutions, he said.
Eddie Barnes told the audience he was in no doubt that to date in the wider debate the Better Together campaign had landed most of the telling blows. But he figured that could work for the Yes campaign – as by now it should realise that it is in a real fight.
SGF members asked questions on everything from business rates to foreign embassies. Answers were interesting but suffered from the fact that they could at best be speculation.
SGF chief executive John Drummond thanked the speakers and suggested there may be a case for holding another debate closer to the referendum itself.

Images – Blair Jenkins, chief executive of Yes Scotland, above left. Eddie Barnes, political editor of Scotland on Sunday, above centre. And Jackson Carlaw MSP, Better Together. The three panellists gave their views on the independence campaigns so far at the Scottish Grocers’ Federation’s special independence debate in Edinburgh last month.