◆ Your special symbol store guide in 2013

BRITAIN’S retail landscape is changing fast. Who would have thought say 10 years ago that we’d see Tesco give up on several of its overseas expansion projects and freeze development of out-of-town megastores to put its money into convenience shops? Tesco certainly didn’t see it that way.
But that’s how it’s turning out – not just with Tesco but with just about all the supermarket giants. At the same time the discounters Aldi and Lidl are recording substantial sales growth, developing premium fresh and deli ranges, and considering sites that would previously had been thought not ideal for their operational model.
And independent convenience stores are changing too. The trend among local store owners to move to symbol or fascia operation has been established for some time, but in recent years it has intensified. At the same time the symbol groups and fascia organisations have become increasingly sophisticated in their own operations. Some have been developing new fresh produce systems designed to allow retail members to compete on fruit and veg and to encourage regular and repeat consumer visits. Others have segmented their symbol chains, offering solutions to suit a wider variety of stores, a wider range of stores sizes, and stores with a variety of local, demographic influences.
More recently, some groups have launched second and third fascia operations – allowing more stores to join up and providing consumers with a greater choice of shop styles.

Mergers have been announced – although the competition authorities may yet have a say on those. Nonetheless some observers expect more mergers and takeovers – as wholesale giants and symbol operators go for increased buying power and seek the most efficient methods of distribution, delivery and back-office services.
So where are we now and what’s the future looking like in the fascia store world?
The food retail industry’s research and education charity IGD regularly surveys the convenience scene. Its latest analysis, delivered last month, charts the recent performance of the convenience retail channel. In a tough economy it’s shown to be growing ahead of general inflation, which is a solid result by any measure. And IGD is bullish about the future of convenience stores too – predicting that the c-stores’ rate of sales growth will actually accelerate.
Within the recent convenience performance there are interesting trends, however. The c-stores’ success hasn’t been evenly spread by any means. And while symbol or fascia stores have certainly done well there are some danger signs too.
Using data collected in the year to April 2013, and comparing it to equivalent data for the preceding year, IGD last month said the UK food and grocery convenience market was worth £35.6bn a year, which meant it had achieved 4.9% growth on the previous 12 months.
And the organisation expects things to get better still. It’s forecasting average annual growth of 5.3% over the next five years, which would see convenience stores add a third to their current total and reach £46.2bn by 2018. 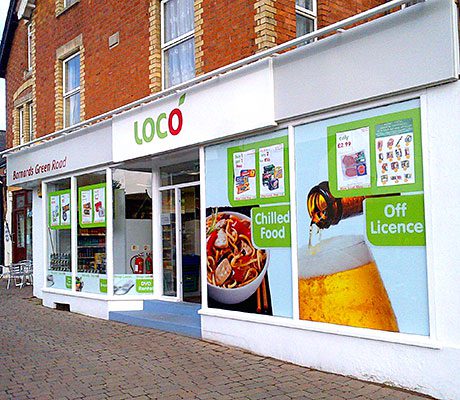 Symbol groups (such as Premier, Spar, Costcutter, Nisa, Keystore, Lifestyle Express, Londis, Shopsmart, Day-Today, Best-one, Mace and others) now account for just over 40% of convenience sales – well ahead of any of the others styles of c-store.
However, the latest figures carry a sting for the symbol operations. When last year’s analysis was announced symbol stores hadn’t only recorded the highest share of sales, their collective sales total was also the fastest-growing in the market. Back then the symbols had achieved year-on-year growth of 9.2% to reach a total of £12.6bn, which gave them a combined share of c-store retailing of just over 39%.
In its most recent figures IGD said symbol store sales totals grew by 8.4% (a little less than last year’s rate but still very impressive). It meant the symbol stores’ sales totalled just under £14.8bn and their share of the total was up too – the symbols now account for more than 40% of the total.
So far, so good. But the sting comes when we look at the performance of the fast-growing multiple convenience units – all those Tesco Expresses and Sainsbury’s Locals popping up on high streets and under new-build apartments in cities and large towns in Scotland and elsewhere in the UK.
This time round, multiple convenience stores’ growth outstripped that of the symbol groups.
The multiples recorded 11.1% growth to reach a combined value of £6.26bn.
By contrast the total sales recorded by non-affiliated independent stores was down 0.5% to just over £6.5bn. Much of that will be down to a number of non-affiliated operators going over to symbol operation during the period. It meant the non-affiliated convenience outlets hung on to their second place in terms of total sales by the skin of their teeth. And it’s a fair bet that if IGD carries out the same exercise this time next year it will find multiple convenience sales soaring ahead of the non-affiliated stores’ total. 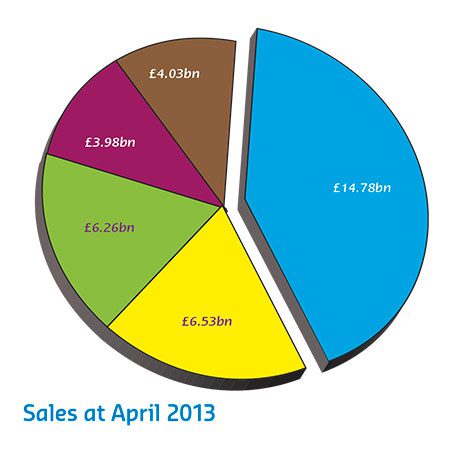 Convenience forecourts – some of which operate under fascia and some of which are independent – saw sales and share of the market fall last year. They were down 3.7% to just under £4bn.
It meant that c-stores operated by co-operatives moved ahead of forecourts. The co-op c-stores saw sales rise by 2.3% to reach a little more than £4bn.
Will the trends continue? Will multiple c-stores provide a major threat to the fascia organisations? We should be able to make some reasonably informed guesses if we look at what has been happening in terms of store numbers.
In the 12 months to April this year IGD found that the number of actual symbol stores in the UK had risen by 3.2% to reach 16,826. The biggest single number of stores is still taken by stores that are non-affiliated, but that figure had dropped by 2.1% to 18,826.
In comparison the number of multiple convenience outlets had risen the fastest. The total number of c-stores from the supermarket giants reached 3,318. That was 9.6% up on the previous year but still represented less than 10% of the sector’s stores.
The alarming decline in the number of convenience forecourts continued – they were down 5.2% to a total of 7,537.
Symbol stores from the co-operatives were up by almost 3% to 2,637.
It looks as it we will see a showdown between symbol stores and multiple convenience stores in the future – but not everywhere.
Looking at the figures on store numbers it’s probably reasonable to assume that some of the growth in the symbol stores’ total came from previous non-affiliated stores choosing to take the symbol route. And some will have come from new-builds and transfers of use of other business sites – failed or under-performing pubs, for example. Those switches, new-builds and redevelopment projects will have been carried out in just about every type of community, all across the UK.
The multiples have probably been in a different position. Many of their stores are in residential development areas or in the high street sites that their supermarkets deserted years ago as the move to build bigger, and then bigger still, developed.
There is absolutely no doubt that some independent store operators (symbol-connected and non-affiliated) will face major competition from the multiples’ c-stores. But it won’t happen everywhere and symbol store companies are busy seeking out the store sites where their own fascia operations can provide communities with a compelling service. The future could well be very competitive but there is all to play for.
And certainly IGD is extremely positive about the future for convenience retailing in general and also about symbol c-stores.
The organisation’s chief executive Joanne Denney-Finch said: “The convenience sector goes from strength to strength – we are forecasting £11bn in extra annual sales between now and 2018. 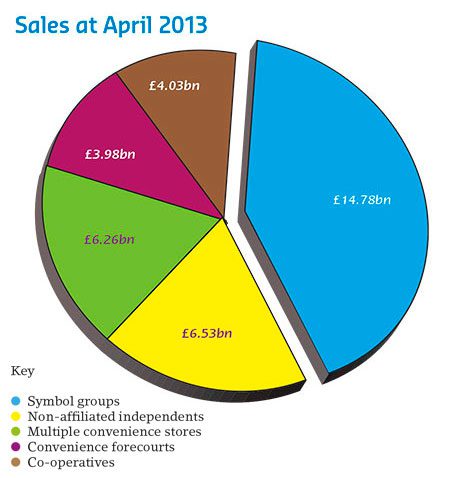 “The increasing quality of the stores and shopping experience is helping to broaden the sector’s appeal. Rather than offering the same thing to everybody, convenience operators are increasingly tailoring their stores and products depending on local demographics and shopper missions.
“Convenience stores are also making the most of their convenient locations with some differentiating themselves by offering Amazon lockers, for example, while others are providing pick-up locations for parcel deliveries. This provides busy shoppers the chance to use the large convenience store network to make their everyday tasks easier to manage.
“Symbol groups offer independent store owners the chance to join a growing part of the market, providing advantages such as group marketing and collective purchasing power,” she said.
“And with different types of retailers placing such an emphasis on the convenience sector, there’s never been a more exciting time for the channel.” 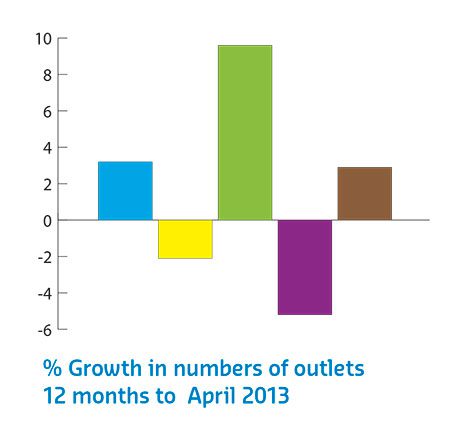 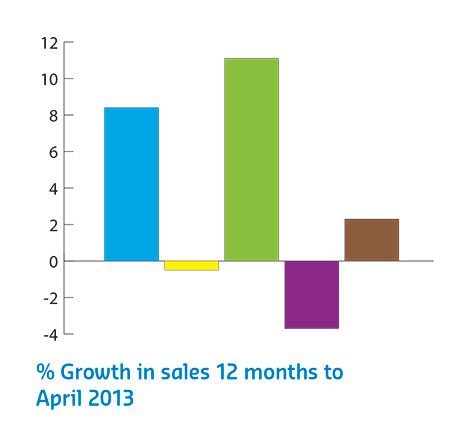