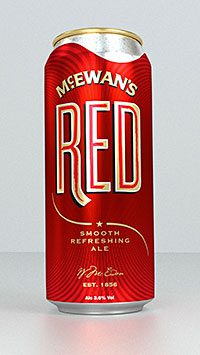 FAMOUS Scottish ale brand McEwan’s is adding a modern touch with the launch of McEwan’s Red.
The brand, owned by Bedford-based Wells & Young’s, has added Red to refresh its current portfolio. It’s designed to appeal to McEwan’s existing consumers and attract younger drinkers.
Brewed at an ABV of 3.6%, Red’s striking colour is achieved without chemicals. Instead, it comes from the malted barley used in the brewing process. The ale is described as lightly hoppy with a smooth finish, delivering a depth of flavour that the brewer promises is “still sessionable”.
It will be available in a 440ml can with fixed widget in a range of pack sizes.
The brand will be listed by Filshill, with other wholesaler and convenience outlets expected to come on board this month. It’s also going into a number of multiple grocers.
Wells and Young’s said research carried out by Taylor Mackenzie showed that Red appeals to men aged 30-50. A TV campaign, by Scottish agency The Union, follows drinkers on a red-carpet journey as they make their way to a McEwan’s Red. Wells & Young’s describes it as “positive, upbeat, modern and high-energy.”