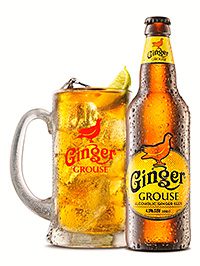 WHISKY and whisky-linked drinks are often thought to be hard to sell to young adults. But Famous Grouse distributor Maxxium says it has had success with Ginger Grouse, its RTD aimed at 25-40 year-olds.

Since launching in September, Ginger Grouse has been on the shelves of the major multiples, Booker cash and carrys and Keystores, via Filshill.
The Scottish launch was supported with a 20-second TV ad. And in Glasgow, Ginger Grouse took over two subway stations – Buchanan Street and St Enoch – to highlight the brand.
Ginger Grouse is now rolling out across the UK and should be in 2,000 retail stores by the end of the year.
With Famous Grouse itself, Maxxium is focusing on premiumisation and attempting to recruit new consumers into the sector.
“Young adults are becoming increasingly discerning when it comes to their drinks choices,” said Peter Sandstrom, marketing director of Maxxium UK. “Premium expressions offer a new route into whisky away from traditional stereotypes.”
He noted the Black Grouse, which has added peated malts, as well as the Naked Grouse and the Snow Grouse as examples of youth-friendly premium brands.