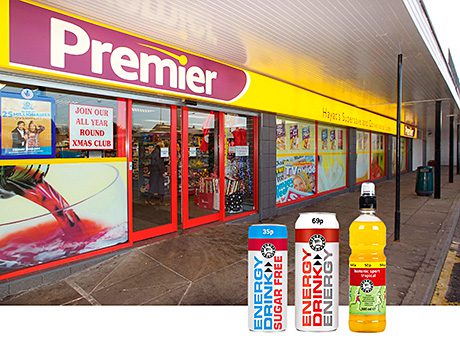 IN recent years, energy drinks have proved a soft drinks frontrunner and the category has been marked by a number of very successful brands and innovative marketing that has often included links to music, extreme sports and youth culture.

But recent months have seen significant changes in energy drinks consumers’ purchasing patterns, c-store retailers have told Scottish Grocer.
To put it simply many energy drinks shoppers are searching for value.
The quest takes many forms. Some are attracted by price-marked packs and promotions on their favourite brands. But others have appeared to have become much more ready to try retailer and wholesaler own label lines and own-label and those products seen as budget or value brands.
At L&M Stores Premier in Aberdeen, owner manager Leslie Kilminster splits functional and energy drinks into three sections – caffeine, glucose and sport – and has arranged the drinks across two 1.5m CCE chillers fitted with energy-saving doors.
It’s a small outlet so he doesn’t have a lot of sales space to work with. But the customers who visit the 24-hour store buy a lot of soft drinks, so he makes sure a good amount of space is set aside for the core range in the chiller, and for soft drinks promotions.
Leslie knows his customers well. In recent times he has realised value has become very important to them.
As a Premier store operator and Booker customer he has access to the increasingly wide range of value lines that the wholesaler has assembled in its Euroshopper collection. And one huge Euroshopper success has been the 35p price marked 250ml cans of its energy drink. 35p is a very competitive price but Leslie also has the cans on a long-term multibuy offer, three for £1, and the store’s sales figures show the cans are a clear best seller in energy and sports drinks.
Sales of the Euroshopper 35p PMPs increased 28% in the first nine weeks of 2013, compared to the same period in 2012. And customers can also choose from the wider range of Euroshopper energy and sports drinks flavours and formats.
Euroshopper cans are not the only PMPs in the section – the majority of products in energy and sports drinks are price-marked, says Leslie, the only brand that isn’t currently is Red Bull.
And Red Bull is certainly still popular, he said, but he plans to sell through stock he has in store at the moment and bring in price-marked versions.
“A small percentage of people will always go for the brand they like but more people are now dropping their price and looking for value over brand,” he said.
The city store owner reckons buying caffeinated drinks is becoming a habit for shoppers, with energy drinks now a part of the daily routine.
He sees young adult consumers using energy drinks in different ways – buying cans in bulk at the weekend to use as mixers, often replacing more traditional carbonated soft drinks.
• Shoppers at the 1600 sq ft Muirside Stores, Spar Tullibody, also have value in mind when they’re looking for energy drinks. Price appears to be more important than trying out different flavours, for example, says owner manager Elaine McIntyre, who runs the store with her husband Derek.
Elaine has made sure there’s a selection of brands, flavours and formats available in energy, but says that the majority of customers who come in looking for energy drinks are happy with “original” flavoured own brand or budget branded drinks.
Spar’s own-brand Blue Bear energy drink sells well, she said.
“People don’t mind just going for the normal taste and flavour of energy drink, as long as they get good value,” she explained. “Shoppers want the brand that’s cheapest.”
Muirside Stores, Spar Tullibody has been open for just over six months but even in that time, Elaine says she has seen sales of energy drinks slow down. She puts the dip down to the cold weather conditions, but says that as the purchase of energy drinks is becoming more of a habit for shoppers now, it’s the kind of product category that will always keep ticking over.
“It used to be a struggle for us to keep energy drinks in stock but now we don’t seem to have a problem keeping them on the shelf,” she said.
“People don’t seem to be buying quite as many energy drinks at the moment but weather could have a lot to do with it.”
• For some consumers, buying what they see as good value cans of energy drinks has become part of a daily routine, especially in the morning, said Akky Hayat, owner manager of Premier Hayat’s Supersave and Convenience Store in Happyhillock Shopping Centre, Dundee.
Soft drinks are important to the store and there are plans to make them work harder for the business.
Akky aims to increase the store’s chilled soft drinks section by bringing in another chiller and will also be changing how the section is organised – grouping products by type vertically as opposed to horizontally.
He reckons many of the customers who buy a breakfast time energy drink have changed from early morning purchases of water and flavoured water.
Increasingly they want a caffeinated boost at the start of the day.
“Energy drinks are the must-have item in the morning now,” he said.
“People want the kick-start that an energy drink gives
them. It’s not really about flavour.”
“Energy drinks shoppers are looking for bigger cans.”
But if his shoppers want to increase their energy levels, they also want to curb spending, so if an energy drink is on promotion, it will sell significantly more, said Akky.
“Red Bull has an RRP of £1.35 but we have it on at a 99p promotion – with stickers on the cans at the moment – and it’s doing really well,” he said.
“Cans of Relentless, usually around £1.39, do well when they’re on promotion.
As a Premier store operator, Akky, like Leslie, stocks the Euroshopper range of energy drinks cans and says they sell well, especially in the morning with shoppers making their way to work.
“Customers are very price-conscious now and they’re not loyal to brands,” he said.

Images – Premier Hayat’s Supersave in Dundee. Major brands sell well on promotion but Booker’s value range under the Euroshopper brand is popular too.