As cigarette and tobacco prices soar, and the health lobby pushes for more restrictions, retailers and consumers have been discovering electronic options.

Does it pay? Will it last? Is it likely to be regulated? Who are the big names? 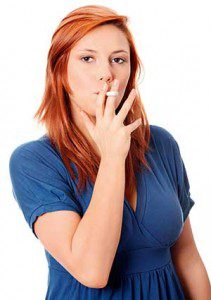 IT isn’t easy being a tobacco retailer and it isn’t getting any easier.
Tobacco is an expensive product for retailers to buy in, and more expensive still for consumers to purchase … if they use legitimate sources, of course. That’s largely down to the combination of taxes levied on cigarettes, cigars and tobacco – duty added before it reaches the store, VAT collected on behalf of the government in shops, and, in Scotland for large outlets that stock both tobacco and alcohol, an additional health levy linked to the rates system.
The Treasury seems wedded to a policy of raising duty at rates higher than inflation. The Scottish Government is now pressing ahead with its plans to ban the display of tobacco products and introduce the most severe rules on how much space can be exposed when a tobacco transaction occurs. And anti-smoking activists are working hard to have the rest of the world follow Australia and introduce standardised tobacco packaging.
Margins on tobacco products are tight and secure delivery or collection and storage is vital. Many of a retailer’s tobacco customers will be trying to quit and to stop buying the goods; those who do smoke face increasing restrictions on where they can do so.
Of course tobacco also has important strengths for the retailer, especially the local retailer. Even if margins are tight, the products do return profit. Tobacco consumers are often regular and loyal local store customers and they frequently buy other goods, especially items like newspapers, confectionery and lottery products.
But in the modern heavily regulated UK smoking market there is now a non-tobacco alternative – provided by a growing number of suppliers producing battery operated nicotine vapour products that the public views as electronic “cigarettes”.


And the signs are that many of Scotland’s local stores are joining the vapour trail. So, what does that entail? What’s in it for the retailer? And how are things likely to develop?
One of the most important aspects of the current market is that it isn’t specially regulated. Many brands say their products are not for sale to under-18s however.
While some medical and health organisations express concern that not enough is known about the products and their potential effects, some groups and individual experts have been ready to say that, for an existing smoker, a switch to electronic cigarettes will be beneficial. That’s because the electronic vapour products do not contain carcinogens associated with tobacco; in particular the vapour products don’t contain tar.
A typical electronic cigarette system will include a battery and atomiser which, when used in conjunction with a nicotine-containing chamber, produces a nicotine vapour which both delivers the smoker’s “fix” and resembles smoke.
A starter kit will also include a battery charger, often a usb set-up which can take power from a computer or from a normal electric socket.
Systems have been available for some time and, broadly, break down into three different styles.
One resembles a pack of cigarettes and includes several “sticks”.
Another form, apparently increasingly popular in c-stores, is a system that contains components that provide several “smokes” before the user replaces individual parts of the system with refill items. Typically the kit is designed to look like a traditional cigarette – with a white tube, light brown “filter” and a glowing red end intended to respond and light up as the smoker drags on the unit.
Conversely there’s another style that looks much more electronic – a dark tube that resembles a pen – with a glowing blue neon light. It wouldn’t easily be mistaken for a real cigarette in an area where tobacco smoking is banned.
While the products have existed for some time they appear to have increased distribution and sales very significantly in the last year or two. There are now several companies supplying competing products and a number are involved in the industry’s own trade body.
There’s also an active UK electronic cigarette consumers’ group, ready to take a forceful part in any debate over future regulation of sales.
For, among those who support maintaining and extending the availability of electronic cigarettes as an option for adults who seek nicotine, there are fears that the government may wish to restrict sales (for example to pharmacies) or tax the products heavily.
And that’s where definitions become very important. Most of the suppliers stress the electronics provide an alternative to cigarettes for adults … not a “cure” for smoking. It’s an option they stress which is free of tar, ash, odour and restrictions on use in public places.
The fact that they don’t contain tar and that nicotine, while highly addictive, isn’t generally considered to be carcinogenic, leads some to argue that, though not medicinal, e-cigarettes are less harmful than tobacco products. Indeed many in the electronic cigarettes industry refer to the e-cigarettes as “harm reduction” products and, importantly, not as “smoking cessation” remedies.
And of course that will have an effect on sales and consumption patterns. If smokers choose to “vape” rather than smoke but do not give up on nicotine entirely then they will continue to buy the refill items and to visit the outlets that supply them.
As is often the case with products which have shown sudden growth it’s difficult to get a clear understanding of how big the market actually is.
The E-Cigarette Consumer Association (ECCA) says electronic cigarette users in the UK were measured by the anti-smoking organisation Action for Smoking and Health (ASH) at 301,000 in 2010 and at 650,000 in the second quarter of 2012. EECA says some estimates in the first quarter of this year suggest there are now as many as 800,000 e-cigarette users in the UK. If that’s correct it means 6% of smokers may have switched to “vaping”. And many market watchers expect the number of e-cigarette users to continue to grow this year.
Tobacco group BAT has set up a company to look at possible product development and Imperial Tobacco told Scottish Grocer it was “building considerable knowledge and expertise in the field of e-vapour products” and is “actively engaging with regulators to support the development of appropriate regulatory frameworks”.
But for the moment retailers who want to stock e-cigarettes have a choice of many non-tobacco-industry suppliers, including a number of specialists. Companies and brands include E-Karma, E-Lites, Freshcig, Green Smoke, Nicolites, Nucig, ROK, Skycig and others.
In commercial terms e-cigarettes offer clear opportunities to retailers. Margins can be high and some brands are available on sale or return.
It remains to be seen how the tobacco industry, the government and others respond. But for the moment it looks as if e-cigarettes are products whose time has come.