TESCO has rolled out an all-electric home delivery fleet across Glasgow, as COP26 draws to a close in the city.

From this week, Tesco customers will have their shopping delivered from one of 17 all-electric Tesco delivery vehicles, as part of the supermarket’s ongoing campaign to achieve net zero carbon emission status by 2035.

Tesco has claimed over 3,700 deliveries per week will now be made by electric vans powered by “clean green energy”. The supermarket has also committed to electrifying its entire delivery fleet by 2028.

In addition to the new electric vans, Tesco also plans to install 2,400 electric vehicle charging points across 600 stores, including 72 in Scotland.

The UK’s largest supermarket has also invested in five new wind farms in Scotland and four new solar farms across the UK.

As part of a push to reduce supply chain emissions, Tesco has committed to increasing the use of rail freight. Five trains per week currently carry fresh produce for the supermarket from Spain to England, and Tesco plans to introduce a new rail service running directly from Spain to Scotland by the end of this year.

Jason Tarry, chief executive of Tesco UK and Ireland, said: “In this critical decade for climate action, businesses must play a key role in driving transformational change. As part of our efforts to secure a COP26 legacy for Glasgow, I’m delighted that Glasgow will be the first Scottish city to transition to an all-electric Tesco home delivery fleet.

“We’re also increasing our use of rail distribution to take more emissions off our roads and helping boost UK’s renewable energy capacity by investing in renewable energy infrastructure, including nine new wind and solar farms across Scotland and throughout the UK.”

Scottish Government minister for transport Graeme Dey, said: “Government, individuals and businesses all have a role to play when it comes to taking climate action. This is a welcome step from Tesco, looking to secure a lasting legacy from COP26, and good news for customers in Glasgow, where over 3,700 deliveries a week will now be completed using zero emission vehicles – helping to protect our climate and improve air quality.

“This is just the beginning of action taken by Tesco and it is encouraging that the company is expanding the use of rail freight for the movement of fresh produce, investing in renewable energy infrastructure and decarbonising its entire home delivery fleet by 2028.” 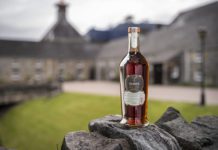