With a raft of rule changes for tobacco sales coming into force this spring, Scottish Grocer takes a look at how larger packs and plain packaging may affect convenience retailers.

WITH hardly a minute to catch a breath following the introduction of the tobacco display ban, convenience retailers are again faced with big changes to the rules regulating cigarettes and roll-your-own.
For retailers with branded tobacco stock, 20 May is the deadline for sell  through, and tobacco firms and wholesalers have said now is the time to prepare stores, ensuring no stock goes to waste and sales remain buoyant.

Andrew Miller, head of field sales at Imperial Tobacco UK, reckons the increase in minimum pack weight to 30g is the “most notable feature” of the new legislation in terms of roll your own (RYO).
Miller said the larger pack size, “will effectively present the largest rise in price for those adult smokers” who are currently purchasing smaller weight RYO packs.
“It is therefore conceivable that RYO consumers will be affected the most significantly of all smokers post-20 May,” he said. “Especially those who currently partake of the ‘little and often’ trend which involves low weight pack sizes.”

The loss of RYO small pack formats in May will bring change to the structure of the sector, Miller said, but the Imperial Tobacco executive confirmed his firm will continue to support its portfolio.
He said this would be achieved by Imperial Tobacco “both reacting to and catering for changing adult smoker trends as the category develops through 2017 and beyond”.

Part of that support will include compliance resources for retailers to help them navigate the new rules. Miller said his firm continues to see evidence of “customer confusion” around the new regulations, and independent retailers will play a crucial role in educating customers as the May 2017 sell-through deadline comes closer.
“Imperial continues to provide the independent trade with a suite of educational materials around the new legislation, including price lists, new Partnering for Success START packs updates plus a number of fun and informative iPad games to improve their knowledge around May’s incoming changes,” said Miller.

By inflating prices, retailers think they are adding profit to their bottom line but in effect they will be driving tobacco shoppers to their competition.

“We would advise the independent trade to use these kinds of materials as the basis of any conversations around the loss of price-marked packs and ensuing customer issues over price perception, as well as queries around the new incoming minimum pack sizes, etc.”
Richard Booth, director of trading – tobacco and category management, at Bestway Wholesale agreed that it’s vital retailers are up to speed on legislation.

Booth added that it’s crucial retailers “manage their stock properly” ahead of 20 May, after which it will be illegal to sell branded packs or smaller pack sizes.
“There has to be an emphasis on stock rotation so that they are not left with unsellable packs after the cut-off date.
“This means placing any branded packs at the front of the gantry and selling through smaller packs in time,” he said.

What will May mean for RYO?

From 20 May the tobacco products retailers can sell must meet the following criteria to remain compliant with European and UK legislation.

•    No branded packaging for cigarettes and rolling tobacco, standardised colour.

One of the effects of the new tobacco rules could be a drop in footfall, with larger pack sizes leading to fewer visits.
Booth said the key to handling this is to maintain smokers as customers, suggesting that retailers will benefit from communicating clearly that they not only sell RYO but at the RRP.
“Retailers often shop around for the best prices on tobacco. Why do they expect smokers to react differently?
“If they continue to price at RRP or below then sales will remain. If they think that they will get more sales by sticking on an additional 15-20p as there is no longer price-marking in operation then they will lose footfall, sales and profit,” said Booth.

Sticking to RRP when 20 May comes around is the advice from Booker, but Booth said there is “already evidence” that only 20% of retailers are sticking to this pricing since the abolition of price-flashed packs, however the trading director reckons this is a false economy.

“By inflating prices, retailers may think they are adding profit to their bottom line but in effect they will be driving tobacco shoppers to their competition who are pricing more sensibly,” he said.
A final consideration flagged by Booth was speed of service, which he reckons could have an impact on customer retention from May.

“Since all packs will be the same size and colour, retailers will need to look at the best way to merchandise their gantry so that they can continue to serve customers promptly and avoid queuing at till point,” said Booth.
“Wasted time at till point could result in lost sales in the future as tobacco shoppers become dissatisfied.” 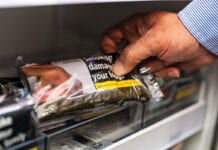 Roll your own is booming