For the majority of convenience shoppers it seems that cash is still king, but that could be changing faster than many realise. And with mobile payments growing in popularity, could both cash and bank cards soon become as obsolete as the cheque book?

THE demise of cash has been predicted for a long time. However, even bearing in mind its continuing significance to the convenience sector and assurances from the Royal Mint that global demand for coins is as strong as ever, there are signs that things are changing.
Contactless card payments have been on the increase in the past 12 months, particularly since the limit increased from £20 to £30 in September 2015. The UK Cards Association has confirmed that consumers spent over £7.5bn through over 1bn completed transactions in 2015.
Even if cash is yet to be usurped, it appears to be increasingly important for retailers to be able to offer a range of payment options.
And there are some willing to suggest that the end days of cash and even bank cards are fast approaching.
The Co-op has reported a sharp rise in contactless payments, and while it says cash still remains king for most shoppers, it has predicted it will be outstripped by contactless on mobile phones within the decade.
A report on consumer behaviour and shopping trends issued by the convenience retailer, which has 2,800 stores and almost 12,000 contactless paypoints, says that almost two thirds (65%) of all transactions are still paid for with cash. However, contactless use has trebled in a year as more bank cards with the technology come into use and following the launch of mobile payment platforms such as Apple Pay.
By 2025 it predicts 65% of all transactions will be by mobile phone as it becomes the preferred payment method, with bank cards and cash becoming a thing of the past, like cheque books.
The latest figures from The Co-op show contactless has topped almost 11m transactions in a month, up 1.4m (15%) on the previous period.
However, of particular note to Scottish retailers is the fact that use of contactless payment was at its lowest in the North region, which includes Scotland, with 29% of food spending via contactless, compared to 33% in Central and 37% in the South.
“We’ve seen incredible growth in contactless and it is the payment medium of tomorrow, although mobiles are ringing the changes,” said Cheryl Marshall, retail chief information officer at The Co-op Food.
“The new technology is perfect for convenience stores as shoppers buy fewer items and speed is important to them.
“Cash is still king as people enjoy carrying money, however we predict that by 2025 mobile payments will overtake cards and cash.”
Despite the ease of contactless, a survey of 2,000 shoppers showed a reluctance by some to use the method. The retailer’s payment data shows that despite the spending limit being raised to £30 on contactless payments, shoppers still opt to use the chip and pin service, rather than tapping the contactless pad, for transactions over £10.
It’s possible that for many, the decision on whether to use contactless or not comes down to trust.
Future Thinking, the business intelligence research consultancy, and survey company Toluna recently carried out an online survey and analysed the results of over 2,300 respondents across the UK, asking consumers about their attitudes towards contactless payments.
31% of respondents said they never pay by contactless as they don’t trust it. Crucially for the convenience sector, age appears to play a key role in usage. 22% of under 35’s said they never pay by contactless as they don’t trust it, compared to 43% of over 55’s.
“It is clear from recent figures that there has been a huge increase in the number of purchases using contactless technology,” said Noreen Kinsey, senior research director at Future Thinking. “This reflects consumer desires for quicker payment methods and increased convenience.
“As with all new technologies there is still some reluctance towards this technology, particularly amongst older age groups, who may be further isolated as we move towards mobile pay and other tech-enabled purchase solutions.”
The challenge for new mobile payment companies is to change the habits of both retailers and shoppers.
Already in use in pre-pay hospitality environments, data insight and mobile payment platform Zapper recently adapted its pay-at-counter solution for convenience retail outlets in the UK. 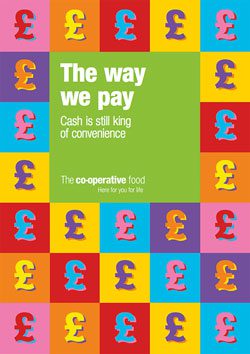 65% of transactions at The Co-op are paid with cash

Its system is designed to be simple and reliable for shoppers, requiring them to open the app on their mobile phones, scan a unique QR code at till point to quickly pay then leave starred rate and review feedback, instantly visible to the retailer.
And Zapper is hoping its digital loyalty features will encourage interest and uptake from retailers. Its online portal enables retailers to analyse valuable data insights with variables such as time of day, total basket spend, regular items, plus instant rate and review feedback results.
Using this data, retailers can better understand shopper experiences, busy and quiet periods, transactions and product performance to adjust the staff and offers accordingly. They can also communicate directly with individual customers and reward by sending offers personalised to their previous shopping purchases.
By using Zapper’s pay-at-counter solution, retailers can also display rolling adverts to customers about offers and updates while they are waiting to pay.
Anish Keshwara, a Nisa retailer in Peterborough, recently agreed to test the Zapper solution.

“We are always looking for innovative ways to improve our in-store customer experience and believe Zapper’s data insights and mobile payment platform is the future for retail convenience,” he said. “We are therefore looking to trial Zapper in a number of our stores and are looking to build a long and successful partnership.”
Gerry Hooper, CEO of Zapper UK, said: “The Zapper solution has proven to be a huge success in the hospitality sector since its launch into the UK just over a year ago. With a smarter time and labour saving solution, why wouldn’t retailers want to use Zapper and understand shoppers’ purchase habits and instantly reward loyalty?”