RETAILER Saleem Sadiq was named winner of the Scottish Grocer Industry Achievement Award, presented in association with Glen’s Vodka, at the end of a spectacular evening of Scottish Grocer Awards at Glasgow’s Hilton Hotel.

Saleem, who runs the large Spar store in Renfrew’s Paisley Road, came to Scotland from Pakistan as a child in the mid nineteen-sixties and has worked in the wider family business, which he now runs with his brothers, since he graduated from university. With his team in Renfrew he has turned the Spar store into one of the most awarded shops in Britain, one that has been frequently upgraded and is about to become the first Spar new concept store in Scotland.

There were also impressive double victories for both the McLeish shop in Inverurie and Wallyford Day-Today in Wallyford, East Lothian. 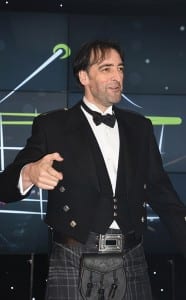 • All the news and pictures of our retail stars, and of the Scottish convenience retail industry event of the year, in our Awards special – starting on page 34.