FOLLOWING a nationwide search that attracted 20,000 candidates Patrick McBride, a 39 year-old firefighter from Liverpool has been named the new Milk Tray Man. 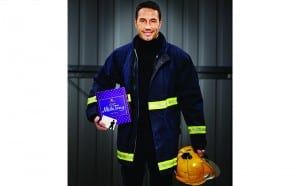 Over the next 12 months, says Milk Tray brand owner Mondelez International he will wear the trademark black polo neck on missions to show the nation what real thoughtfulness is.

Between the 1950s and the 1990s successive Milk Tray Men were seen in cinema and TV ads going to extreme lengths to deliver a box of chocolates to the women they loved.

The 21st century version will reveal the caring and sensitive side of the character.

Senior brand manager at Mondelez International Hortense Foult Rothenburger said: “We chose Patrick from a long list of applicants because we truly believe he has the qualities of the new Milk Tray Man – someone that is thoughtful as well as adventurous.”