92% of retailers affected but much going unreported, say police

NINE in 10 convenience retailers experienced some form of shop theft in 2014, yet much of it is not reported to the police.
The troubling data came to light at the first Scottish Grocers Federation Retail Crime Seminar, which featured the launch of the SGF Retail Crime Report. 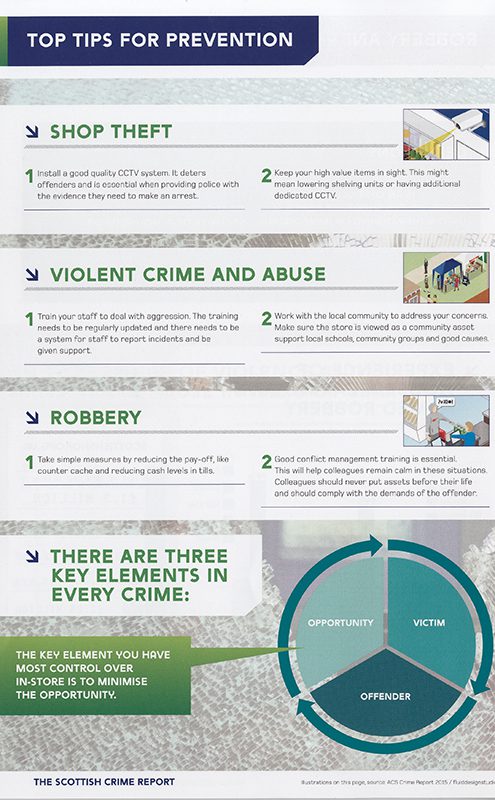 “There is a lack of confidence in the police service and that is a concern to me.”   – ACC Kate Thomson

Figures also reveal that 35% of retailers are subject to abuse and aggression during the course of their work. Aggression and abuse happens most when retailers and their staff are enforcing age restrictions and challenging customers for proof of age.
In 2014 the total cost of crime to the participants in the survey was £1.3m, with £1.25m of that attributed to theft, but retailers continue to invest significant funds in preventing crime against their stores and staff.
Among the same stores, average spend on crime prevention  measures in 2014 was £3,890.
The SGF Retail Crime Seminar was held at RBS conference centre at Gogarburn in Edinburgh, and featured a number of presentations, exhibitions and break-out sessions.
One of the key speakers at the seminar was Assistant Chief Constable Kate Thomson of Police Scotland, who launched the Standards Charter for Safer Business, which provides a step-by-step checklist for ensuring businesses reduce the opportunities for crime to occur.

Thomson said: “I know only too well the impact that crime has on people and businesses. I remain concerned that there is under-reporting. There are a lot of reasons for that, but there is a lack of confidence in the police service and that is a concern to me.
“We’re looking at the ways that we engage with communities, and not just geographical communities, but communities like this federation.”
Police Scotland will launch a public consultation on 1 April, which aims to improve the engagement process. Thomson asked that all retailers take part.
“If our engagement process is better, if our understanding of what’s important to you is better and you give us that feedback, we’ll be better able to build our response to you in a way that meets your need,” she said.
Asked why retailers were not reporting crime, Thomson said: “The simple answer right now is that we don’t know. I think there are a million reasons why they might not report. Some of it will be due to fear and intimidation, but for those who have genuinely lost confidence in the police service, I would really like to have a conversation about that and see what we can do to improve.”

• Why do you think many retailers are reluctant to report crime? Contact John McNee 0141 567 6032 john.mcnee@peeblesmedia.co.uk