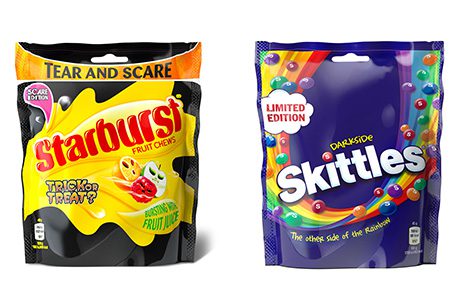 This Halloween sees the launch of two limited editions from Skittles and Starburst, as Wrigley, a subsidiary of Mars, aims to capitalise on the biggest sugar confectionery season of the year.

Skittles Darkside pouches and single packs will provide consumers with Skittles from the other side of the rainbow, with flavours including Forbidden Fruit, Midnight Lime, Blood Orange, Pomegranate and Dark Berry, while new Starburst ‘Trick or Treat’ sharing bags will contain Apple, Raspberry and Orange flavoured chews, in both sweet and sour varieties.

In a concept derived from the trick-or-treat Halloween game, consumers will have to chew the sweet to find out if it’s sweet or sour.

Both limited edition launches are available across all channels from now until Halloween.

Dan Newell, Wrigley Confections marketing manager, said: “Halloween is the biggest season for sugar confectionery in the UK and is worth over £223m, growing at 7.8%. As such, it represents a huge sales opportunity for retailers, who should be thinking about stocking up on special packs and how to generate in store theatre.

“These two limited edition launches are designed to help retailers capitalise on this opportunity, with Starburst offering a truly engaging chewing experience, and Skittles presenting consumers with something dark and previously unknown in the UK.”