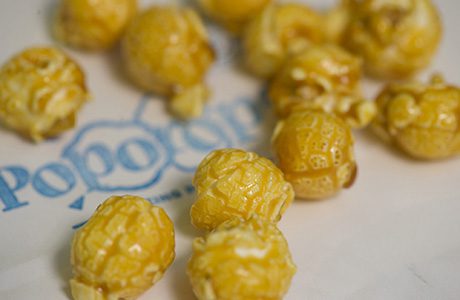 Set up last October by 25-year-old Daman Bush, Poporopo, which claims to be Scotland’s only air popped popcorn company, produces gourmet popcorn using high grade corn kernels imported from the US that are popped using hot air rather than in oil. The large pieces of popcorn are then smothered in four coatings – Chili & Lime, Sweet Ginger, Isle of Skye Sea Salted Caramel and Peanut Butter – at the company’s base in Stirling Enterprise Park.

Already the range, which sells for £2.50 a bag, is sold in select Historic Scotland properties, on the Caledonian Sleeper, in Flavourly gourmet snack boxes, and in 30 independent retailers and delis in Scotland. Now, thanks to a deal signed with Cress Co Food Distributors in July, Daman hopes to secure several new stockists, and has taken on two staff to help with production and at events so he can focus on growing the business.

He said: “Since starting every potential stockist who has tasted my product has taken it on. Being part of Cress Co, who can put us in front of hundreds of the right people, gives us the potential for sales to rocket.

“On the back of the deal I knew I had to take on my first employee, as I’m already finding it hard to keep up with the current demand. I posted a job ad online looking for someone to make popcorn for a living. I had 35 applicants in six days, and instead of just one employee I’ve taken on two.”

He added: “There is so much versatility in popcorn. It is wholegrain, gluten free and until you put a coating on it, it has almost no calories. I’ve never liked the popcorn you get at the cinema or from the supermarket, it’s too small and bitty, so I thought others must feel the same. I produced my first batch at home, bagged and labelled it and took it to an