United Biscuits has launched the latest television advert for savoury brand Jacob’s, in support of its new range of bagged snacks, Jacob’s Cracker Crisps, as part of a £4.25m media campaign.

The new 30 and 20 second adverts feature the ‘Jacob the Baker’ character first seen in 2014 and will support the launch of Jacob’s Cracker Crisps into the UK. 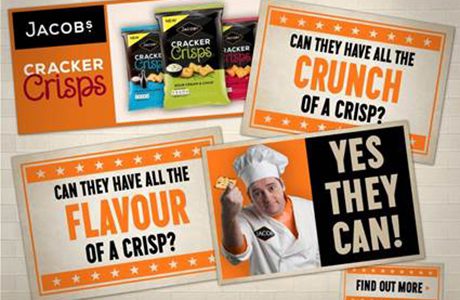 Investment has also been made across shopper channels, through an in-store activation programme and mass sampling campaign to drive awareness and trial. This forms part of more than £6m-worth of investment made by UB to support the new range. It is the latest investment made by UB in the Jacob’s Masterbrand campaign, which will receive a total of £14m support in 2015.

Currently available across grocery and convenience outlets in three variants – Sea Salt and Balsamic Vinegar, Thai Sweet Chilli and Sour Cream and Chive – Jacob’s Cracker Crisps are the flagship NPD for UB in 2015. The new range is currently offered in a 150g sharing bag, with a 40g handy-pack variety due for launch later in the year.

Ted Linehan, director of savoury brands at United Biscuits, said: “The response to our investment in the Jacob’s Masterbrand campaign has already seen spectacular results, with savoury biscuits up 7% in value year on year, ahead of the 5% market average, not least helped by growth within our core brands such as Jacob’s Cheddars (+16% in value YoY) and Jacob’s Crackers & Crispbreads (+12% YoY).

“Through Jacob’s Cracker Crisps we have used our experience with these brands, alongside targeted consumer insights, to develop a new product that delivers exceptional taste and texture, meeting evolving consumer needs in this space. This is a major launch for UB, cementing our position as the consumer go-to in sharable baked snacks.”