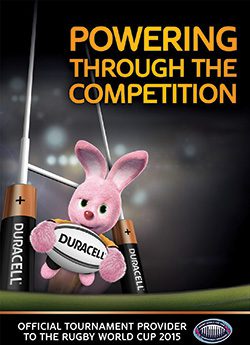 DURACELL has become an official tournament provider for Rugby World Cup 2015.
The battery brand’s business leader for the UK and the Republic of Ireland Vicky Miller said: “ It will be the first time Duracell has sponsored a global sports event of this stature.
“It is also the first in a series of exciting announcements for Duracell where we will be using high-profile partnerships.”

• Guinness says the Rugby World Cup offers a golden opportunity for beer retailers. A spokesperson said: “A recent study by Ernst & Young on behalf of the organising committee for Rugby World Cup 2015, revealed that it is set to deliver nearly £1bn into the UK economy.”

• Lucozade says retailers should maximise visibility of soft drinks in the lead-up to the tournament to capitalise on the fashion for people getting together to watch big sporting events on TV.
Category director Georgina Thomas said: “There is the potential for viewing figures to overtake the 12m that tuned in to watch the Rugby World Cup final in 2003.”