Made available from 16 February for 12 weeks, the new bar combines honeycomb pieces, cereal and honeycomb-flavour toffee, all covered in milk chocolate. RRP is 59p. 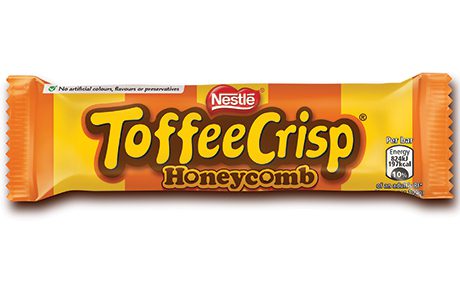 Honeycomb flavours are proving popular with consumers, according to Nestle, which says honeycomb confectionery is growing ahead of the category. Kantar Worldpanel figures, quoted by the company, show penetration has increased 14% in the last year and has contributed an extra £6m in sales to the category. What’s more, in product testing, Nestle says the honeycomb flavour scored highest of all its new flavour options with Toffee Crisp consumers.

A Nestle UK spokesperson said: “With consumers increasingly getting the taste for honeycomb flavour confectionery, what better treat to add to the category than a honeycomb version of the much-loved Toffee Crisp brand.

“The limited-edition Toffee Crisp Honeycomb will be sold exclusively through the wholesale and convenience channel, giving convenience retailers an exciting opportunity to generate additional sales.”