MUCH has been made of the environmental and ethical benefits of energy efficiency. However, ‘going green’ can be as much about business survival as reducing your store’s impact on the environment.
According to the Carbon Trust, a 20% cut in energy costs represents the same bottom-line benefit as a 5% increase in retail food sales.
By improving efficiency, retailers can benefit from significant carbon and energy savings, reducing the impact of rising energy prices on the bottom line.
In Moredun, Edinburgh, Scotmid Co-operative has unveiled a new energy saving store that it hopes will inspire and inform other retailers looking to cut their carbon footprint in 2015.
Described as one of the first and most innovative major sustainability retrofits in the UK, the Moredun store was opened in October.
At its heart is a sophisticated building management system, which uses real-time data to make efficient use of its resources – such as lighting, heating and refrigeration.
“From lighting that automatically turns off when it’s sunny outside, to drinks fridges that only switch on during licensing hours, we’ve worked closely with Resource Efficient Scotland and our contractors to introduce as many energy-saving measures as possible into the store,” said John Brodie, chief executive of Scotmid Co-operative. “We hope that Scotmid Moredun will be a model for what an energy efficiency retrofit can achieve for retailers.” 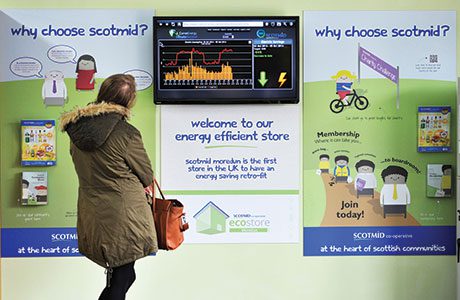 Efficient heating and heat recovery are other key parts of the store’s refit. The heat generated by the fridges is recovered to help heat the building, while an air curtain blows out ambient air to stop heat from escaping when the Scotmid Moredun store’s doors open.
All of the fridges have doors to improve their energy efficiency, and drinks chillers are programmed to switch off when alcohol is not for sale, to conserve energy. Even the store’s ATM has been fitted with energy-efficient LED lights.
“The amount of energy saving initiatives delivered is a testimony to Scotmid’s green credentials and has created a real benchmark for energy saving in retail,” said Stephen Russell, head of construction for CBES, Scotmid’s building contractor.
Iain Gulland, director of Zero Waste Scotland, added: “Taking this approach with an existing store is a genuinely innovative move, as while retailers can easily specify new build stores to high-efficiency standards, it is considerably more challenging with an
older building.
“This project is a bold example of what can be done to embrace resource efficiency, and I hope that many other businesses are inspired by the store and will contact Resource Efficient Scotland for advice and support on how they can replicate these measures in their own buildings, old and new.”
Of course, not every retailer can afford a refit on the scale of Moredun, but shopfitting, refrigeration and air conditioning company The Jordon Group suggests there are plenty of affordable options that can still yield remarkable results.
In recent times there have been developments in refrigeration, both in cabinets (with the addition of very efficient doors, better management of airflow and significant improvement in LED lighting) and in remote compressors and motors that can make a real difference to a store’s energy bills.
Improvements said to achieve the greatest energy savings include optimising settings on existing equipment, fitting transparent doors on display units, replacing condensing units and installing heat recovery solutions as part of system upgrades.
A recent project involving the company saw a local convenience store more than quadrupling in size from 480 sq ft to 2,800 sq ft and adding an extra 7.5m run of chiller cabinets.
Under other circumstances, that would have meant much higher energy demands, but The Jordon Group said the installation of an integrated refrigeration and climate control system had actually halved energy consumption. 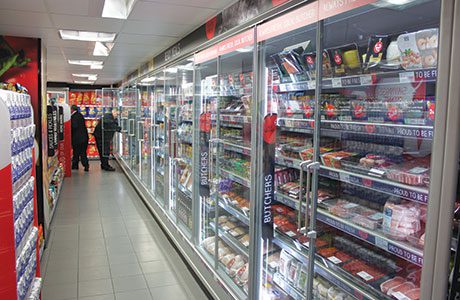 Daikin Conveni-Pack (CVP) units have footprints up to 60% smaller than conventional systems and are argued to be ideal for smaller stores. The units were installed on a flat roof at the rear of the building, connected to four ceiling cassettes and to new and refurbished chillers.
Paul Jordon, managing director of The Jordon Group, said: “The CVP system is recovering up to 100% of the heat generated by the refrigeration cases – about 25kW per unit – which is enough to heat the retail space via the ceiling cassettes, which is why the energy consumption has halved.”
The message is that there are lots of ways that energy can be saved and it’s worth choosing appropriately. If you’re installing equipment check out the Carbon Trust website to compare efficiency.