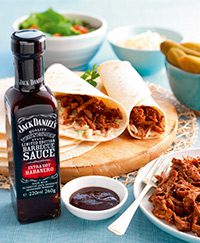 “Last year we developed two new limited-edition Jack Daniel’s sauces, they have proven so popular that they returned in 2014.” he said.
Jack Daniel’s Extra Hot Habanero Barbecue Sauce blends the taste of Jack Daniel’s Whiskey with habanero chillies to give a smokey flavour and its Hot Pepper Steak Sauce ramps up the heat further.