After years of tax and wholesale price hikes, things were looking better in fuel retailing. But in petrol, things are rarely simple for very long.

MOST types of retailing present challenges and opportunities. But, while shops on high streets, in suburbs, and in villages will all have to be aware of licensing law and employment regulations, not many of their operators will feel directly and instantly affected by international commodity markets, currency pressures and geopolitical turmoil.

But forecourts are different. The fuel retailing side of such businesses can and will be affected day to day by volatility in the currency markets and by far-away civil wars.
And back at home there’s always the little issue of the giant multiple retailers to deal with.
So how are things for fuel retailers in Scotland just now?
In short, after a period of unusual price stability and some good results in terms of tax and duty, international pressures have brought new concerns. And at home some recent studies by the main forecourt operators representative group suggests Scotland’s independent fuel dealers are facing especially tough competition from the supermarket giants.
On the up side there are real signs that the shop side of forecourt retailing is making progress. Some of the best specialist and independent operators are working with symbol groups, food-to-go brand franchise firms and others to develop shops and services that are increasingly meeting the needs of drive-in customers and local communities. 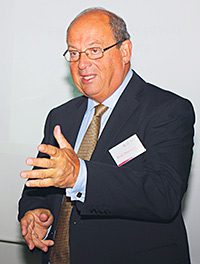 Brian Madderson, chairman of the Petrol Retailers Association is realistic about some of the fuel market pressures, many are outside of the influence of oil companies and wholesalers and of national governments.
But he reckons Holyrood’s attitude leaves a lot to be desired when it comes to using planning and other levers to support local businesses and local jobs.
“The latest geopolitical problem in the Middle East, in Iraq and Syria has certainly pushed the price of Brent Crude up quite sharply,” he said.
“Yesterday it was $113 a barrel, compared to lows in the first part of the year down as far as $103.
“It’s worrying. Bloomberg has interviewed approximately 20 oil traders from different firms and the overwhelming majority feel that the latest problems could push oil prices up further.
“Now this has had some effect on the wholesale prices, by 1p – 2p, but the UK motorist is being saved by the strong pound which hit $1.70 yesterday.”
“It’s difficult to see how things are going to play out, the situation in Libya isn’t getting any better either.”
Beyond the immediate issues of conflict and spot market prices the underlying situation of the oil scene in UK remains stressed.
In Wales the Murco refinery is up for sale and some industry observers expect it to stop producing fuel soon, he said.
“And the rumour is that Essar, the Indian conglomerate is looking to sell the ex-Shell refinery in Stanlow in Cheshire, which they bought three or four years ago.
“So there are continuing stresses and strains on the downstream oil industry, particularly on refineries in the UK.”
For many independent forecourt retailers, however, the greatest stress comes from increasing encroachment into the fuels market by the supermarket giants.

As far as the PRA is concerned the situation is especially marked in Scotland but the Scottish Government doesn’t seem to want to address the issue.
“The big four supermarkets are fighting each other in the trenches because sales are down, they’ve lost their growth – Tesco and Morrisons in particular, Sainsbury’s and Asda to a lesser extent,” Madderson said.
“Unfortunately that means they are using petrol as a loss leader to try to attract consumers back to their out-of-town stores.
“There’s really been no let up in planning applications by them for new forecourts. In the last few months we’ve had no less than five in Scotland including the Isle of Skye and other areas.
“After some research we now know that supermarket forecourts in Scotland have seen a 90% increase over the last 12 years and that compares to about 20% in England and Wales.
“It’s taking advantage of three things.

‘The big four supermarkets are fighting each other in the trenches because sales are down, they’ve lost their growth. Unfortunately that means they’re using petrol as a loss leader’ – Brian Madderson

“The first is the availability of land, cheap land.
“Secondly there’s the availability of cheap labour.
“And thirdly there are councils who still have what we believe to be a mistaken understanding that the supermarkets create jobs.
“Over a period of time they throttle small locally owned convenience stores, butchers, bakers and filling stations.
“And one of the problems is that locally owned businesses tend to recycle the money they earn back into local communities.
“The rate of decline of both company-owned and independently owned petrol stations in Scotland has been higher than in the rest of the UK.
“The average supermarket in Scotland is 10m litres a year, the average of an independent site in Scotland is below 2m litres. With a slowly declining overall fuel market any new supermarket filling station’s volume has to come from existing sources. So, one supermarket opening a forecourt can take the entire fuel volume of five or six local independent filling stations.

“I’ve written to Derek Mackay, minister for local government and planning to alert him to this but he came back with the usual politician’s comment that it’s up to the local councils to make decisions taking into account all of the factors in their local area, which they will know best.
“So, they’re distancing themselves from any sort of intervention to protect existing local businesses and existing local jobs,” he argued.
But while Madderson sees no shortage of challenges the PRA is very aware that successful forecourt retailing has become hugely important to fuel dealers and that retailing standards have risen substantially in recent years.
“Some of the larger groups, with access to investment, are making great strides and offering what they call the roadside retail concept,” he said.
“There are not only branded forecourts but a symbol forecourt shop and then additional franchises such as Starbucks and Burger King. Subway is very popular now, we’re getting more of those.
“Indeed we’ve got Euro Garages completing what should be a spectacular site just south of Glasgow, their first venture in Scotland.
“There are some very good retailers but they do need access to money.”