The fourth project in Scottish Grocer’s initiative to help Scotland’s retailers get the best out of their businesses sees Becky Spencer, P&G’s shopper-based design manager and head of Shelfhelp, visit Londis Kelvindale Mini Market in Glasgow to talk grooming and toiletries.

BUSY and established c-store Londis Kelvindale Mini Market and Post Office in Glasgow’s west end is a family business run by Tahir Ali.
And P&G’s Becky Spencer called at an interesting time. The successful shop had recently gone through a refit. Most of that had gone very well and the business was seeing the returns it had hoped to see. But, as is normal in such exercises, there had been some tweaking to carry out.
As a result the position of some of the categories that would be most affected and aided by P&G’s convenience retail merchandising advice programme, Shelfhelp, had changed location.
In particular, the bay that carries personal care, oral care, haircare and infant care products had been moved. It now faced the wall at the left hand side of the store (if looking from the entrance), close to beers wines and spirits.
Becky reckoned the store had an interesting range but figured that some ranging and merchandising improvements could be made that should result in shoppers finding that the fixture was easier to shop, that best sellers were easier to find, and that impulse purchases could be encouraged because the display would highlight connections between various lines.
As is often the case there was relatively little space available. That meant that different categories and sub-categories would have to be accommodated on the same fixture and, in some cases, on the same shelf.
First piece of advice, keep men’s and women’s products apart if at all possible, Becky said. Many women don’t like shopping for femcare products if there’s a man nearby picking up shaving kit.
Where shelves do have to be shared try to ensure there are appropriate adjacencies. Oral care, skin cleansing and bath products work reasonably well together, for example.
Retailers will often keep relatively high-priced items, like premium razors, behind the counter but, in that case, mention their availability on POS materials next to shaving materials.
Be aware of best sellers in all the sub-categories. Carry products for different functions – shampoos and conditioners for different hair types for example. It’s also good to feature shampoos and other items in the same brand family.

• Londis Kelvindale Mini Market had gone through a relatively recent refit. Largely that had worked well but a series of tweaks had been put in place to help maximise sales in soft drinks and other categories. That had seen toiletries move location in the store.

• Infant care products are important, of course, But purchases are usually pre-planned rather than impulsive and some items,such as nappies, can be in relatively large packs large. Often the best position in a mixed-category fixture is on the lower shelves.

• In a c-store where there is often little available shelf space, and it is necessary to display more than one sub-category in a single bay, it’s important to create clearly delineated zones that cover the different product groups such as oral care.

• It’s usually best to keep items for men and women separate. Generally it’s best to group items by function and to arrange appropriate adjacencies. In a c-store be careful to stock key popular hair products to suit a variety of hair types, but not too many lines of items such as hair spray.

• Categories like hair and beauty, personal care, toiletries and grooming can often see substantial new product development. Check out resources that are available to retailers such as P&G’s Shelfhelp, the in-depth online advice service provided at www.shelfhelp.co.uk. Talk to sales representatives, check epos data, read the trade press and listen to customers’ preferences. 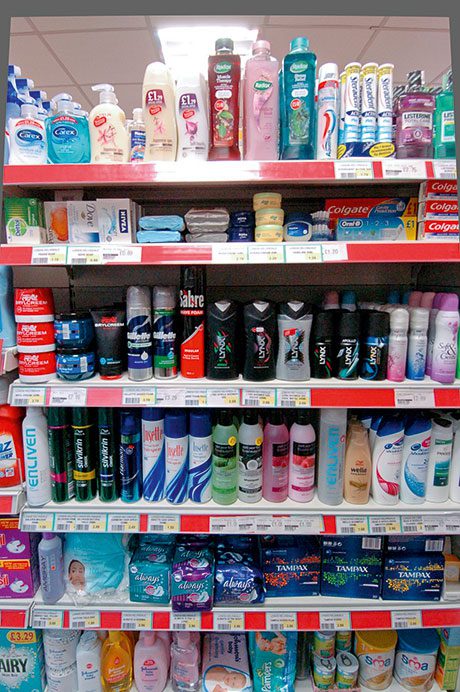