THE economic outlook is sparking debate. Some say we are growing fast, some say we’re not.

But one thing’s for certain, many of the changed consumer habits that resulted from the recession won’t be changing back in a hurry. And that should mean the remarkable popularity of the “big night in” – where consumers increased their episodes of eating, drinking and being merry at home and cut down on their visits to local hotspots – should continue for a good while yet.
If the economic outlook is uncertain the sporting outlook is much clearer. 2014 is going to be a massive summer for sport.
Later in the year Scotland will proudly host the Commonwealth Games and the Ryder Cup. But a summer to remember kicks off, if you’ll pardon the pun, next month, far away in Brazil.
But, even if it’s not here and we’re not there, football’s World Cup (officially FIFA World Cup 2014 Brazil) is the single sporting festival that reaches every part of the planet.
Until the 1960s it was important to some countries (especially Brazil who hosted the tournament in 1950 and lost in the final in what is still regarded as something close to a national disaster) but not to all.
But from 1966 onwards, as TV has brought the global village together, it’s been the biggest show on earth, bigger than the Olympics and much bigger than everything else.
And it’s a festival that retailers, including local shops, c-stores and others, can cash in on.
The football championship of the world begins on 12 June and ends on 13 July. The games are being shown on terrestrial TV, no-one has to have a satellite subscription, no-one has to go to the pub to watch Spain take on the Netherlands early in the tournament or to see England sweat it out against Italy deep in the Amazon forest.
And it’s on accessible TV at accessible times. The matches of greatest interest to most viewers in Britain will be shown at 5pm, 8pm, 9pm, or 11pm.
So what do you have to do to make it work best for your store?
Well one thing that will be important will be to chill, chill, chill.
Drinks are important during any big football tournament but with the importance of this one, the presence of some very good teams indeed, including an intriguing collection of potential surprise packages such as Belgium, Colombia and some of the African squads, and the possibility of good weather and of mixed barbecue and footie evenings, drinks will be very important indeed.
So get your chillers ready, front and back store if possible. Put the dates highlighted on page 48 in the diary. Checkout the thoughts, plans and advice of key retailers, wholesalers and suppliers on pages 50 – 58, and set your strategy for some big nights… and a big, big World Cup. 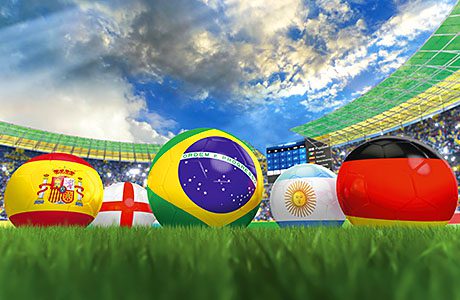