Top-class TV football and beer … over the years it’s been a natural match. How can retailers cash in on drinks sales this summer?

SCOTLAND may not have made it through to the 2014 Football World Cup finals, but that’s no reason why fans north of the border won’t enjoy the beautiful game when the tournament kicks off this summer.
Beers, wines and spirits and indeed a number of modern alcohol favourites including ciders, flavoured ciders, RTDs, premixes and hybrid drinks are all likely to see sales rise, especially if we are blessed with fine weather and an exciting tournament.
Different types of retailer will find different opportunities. Mainstream c-stores are likely to find their customers are most interested in tasty deals on well-known drinks brands. But many retailers might want to branch out a little and feature some of the beers from those countries who did actually make it through to the final 32 in Brazil. 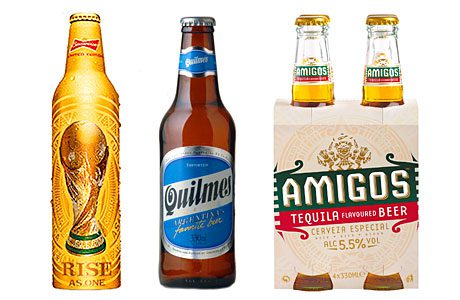 • There’s one global beer brand that we can expect to figure in considerable amounts of World Cup activity, the official beer of the 2014 FIFA World Cup – Budweiser.
It’s running its main campaign in similar fashion across much of the world in what brand owner Anheuser-Busch InBev calls its holistic campaign, Rise As One.
“While football brings out regional pride and fierce rivalries, it also brings fans across the globe together once every four years through shared passion,” said Andrew Sneyd, global vice president, Budweiser.
“With the Rise As One campaign, Budweiser celebrates the world’s favourite game and its role in inspiring fans to celebrate the moments that unite us as a global community.”
Rise As One will feature unified television and out-of-home advertising as well as customised local market activity intended to engage fans in stores, online and across social media platforms.
Budweiser has also launched special packs marking its sponsorship of the tournament, featuring the FIFA World Cup trophy.
Its limited-edition aluminium trophy bottle will be sold in more than 40 countries, and will be the centrepiece of the brand’s packaging efforts, which will also feature limited-edition glass bottles, cans and secondary packaging, all also to be available globally.
The campaign in the UK began in late March with a national on-pack consumer competition offering the opportunity to attend the 2014 FIFA World Cup in Brazil. Consumers also have the chance to win other prizes through a number of routes – including scan-to-win and collect-to-win methods.
New 18-can and six-bottle packs have been launched and a limited-edition FIFA World Cup can will also be available in multiple and convenience outlets.

• If Budweiser is going to the world there are specialist beer suppliers who are bringing beers of the World Cup countries to Scotland.
Morgenrot national account director, Graham Archibald, reckons the World Cup and Commonwealth Games present a huge opportunity for Scottish retailers to offer something special and something new,
“Scottish retailers should be creative with their beer offerings to tempt consumers to trade up for these occasions,” he said.
Archibald suggests retailers should stock beers from nations who are expected to do well at the tournament, rather than stocking brands from every country.
He said: “When it comes to helping retailers sell more beer, we try to be bespoke in our approach.
“We expect to see a keen interest in our Spanish brand Alhambra, German brand Krombacher and Argentinian brand Quilmes.”

• World Beers Ltd says that retailers can use the excitement around the World Cup to capitalise on growing demand for craft beers from across the globe.
Peter Karsten, managing director of the company, said: “International events are coinciding nicely with the rise in interest in the craft beer scene, which has demonstrated that consumers want to discover new tastes and trial different beers from smaller, niche producers around the world. Operators shouldn’t be scared to stock an array of different craft and speciality beers from home and abroad.”
The company recently launched two beers from Cervejaria Amazonia, a Brazilian craft brewery.

• Global Brands marketing director Simon Green reckons young adult consumers will boost alcohol sales over the World Cup period. But retailers need to make sure they stock what young consumers want.
He said Mintel research shows that 55% of consumers aged 18-24 are now drinking at home for special occasions and that trend provides anopportunity to make the most of big-night-in sales.
“Consumer tastes have changed,” he said. “Today’s 18-24 year-olds are looking for sweet tasting, easy-to-drink products that are not too bloating. Ready-to-drink (RTD) products and spirit beers are a must-stock for retailers wanting to profit from the World Cup opportunity.
“The beer category has traditionally been a big player during the football season. But Mintel figures show that 28% of UK lager drinkers are interested in sweet-tasting lagers. Nielsen research shows spirit beers have grown by 95% and are set to be worth £45m in 2014.
“Amigos Tequila Flavoured Beer responds to this taste trend with a hint of South American limes. Growing at 84% across existing multiple grocers, Amigos shares almost 50% of the off-trade spirit beer category”
Amigos is available in 4x330ml bottle multipacks, 500ml bottles and 6x330ml cans and Global Brands will run an on-pack promotion on the beer over summer.
“RTDs are worth £5,695 to the average retailer,” Green claimed.
Global Brands has added orange and blackcurrant flavour products to its Hooch range and it’s planning a summer cocktail campaign for its other RTD range, VK.
“Consumers are striving to create an on-trade experience at home, so retailers should be aware of on-trade trends,” Green said.
VK activity will suggest consumers make bar-style fishbowl sharing cocktails, which Global Brands has renamed the “Footbowl” for the World Cup.
Its suggested “Golden Goal” Footbowl cocktail contains two VK Tropical Fruit drinks and two shots of Corky’s Blueberry topped with lemonade and ice.
“Prominently positioning VK mixed packs will help consumers create this experience and increase basket spend,” claimed Green.

• WKD, Scotland’s biggest selling RTD, has some significant big-night-in related activity planned for the period in the run-up to and during the summer’s big sporting events.
Influenced in particular by the World Cup, brand owner SHS Drinks has added a limited-edition Brazilian flavour to the WKD range. It’s also offering consumers coupons giving 50p off a 275ml four-pack or a 70cl bottle of the new flavour.
Coupons have been placed in 100,000 275ml 10-packs of WKD Blue and WKD Mixed Pack.
Debs Carter, WKD marketing manager at SHS Drinks, said: “For many people, enjoying an ice-cold bottle of WKD Brazilian whilst watching a World Cup clash on the sofa at home will be the closest they get to experiencing the festival of football first hand.
“Brazil is renowned for its vibrant night life and WKD Brazilian aims to capture this exotic party spirit in a bottle.
“The new WKD limited-edition will give fans something to cheer about, irrespective of which team they choose to follow.”

• Vicky Mundy, category development manager for convenience at Diageo GB said retailers should remember that spirits also provide popular big-night-in drinks.
She said the spirits category accounts for almost a quarter of alcohol consumed in the off-trade and has the highest share of consumption at parties and similar events.
“The big night in is not just about high-tempo occasions, with 35% of spirits being bought for ‘casual get-togethers’.
“It is important for retailers to stock a range of spirits to suit all occasions, such as vodka for ‘party time’ and beer and vodka for ‘casual get-togethers’.
“Fractional sizes are ideal as they offer consumers the choice to buy a bottle size to suit their particular big-night-in occasion.
“Flavoured spirits appeal to consumers looking for variety and are ideal for a big night in as they can be used in mixed drinks and cocktails,” she said.